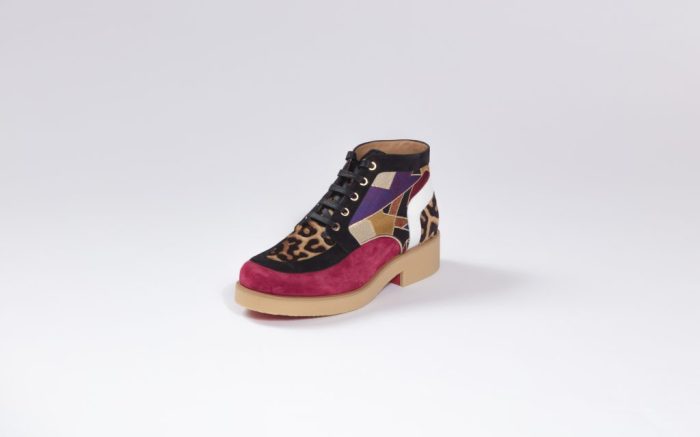 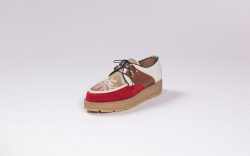 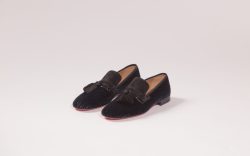 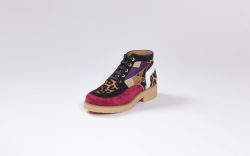 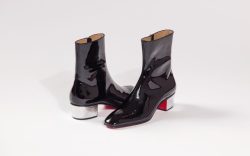 The designer unleashed his inner magpie, showcasing a new Loubi Craft concept derived from a 1999 mule called Trash. The nearly decade-old style featured collaged papers beneath a PVC overlay (a major trend this season), proving that Louboutin has always been ahead of the curve. The 2018 version saw hand-torn pieces of his label’s signature brown paper bags (plus their red interiors of course) similarly layered. The concept played out in studded baseball boots, heeled Chelsea styles and a new creeper with crepe soles.

The theme continued with a ’70s interiors-inspired textile story, featuring opulent patchwork applications across styles, like the Loubi Kick sneaker and a new creeper-soled desert boot. There were also Richelieu models in Louboutin red, suede slippers in optic print jacquard or pony – that went by the name By The Sofa – and high-top evening sneakers in lustrous jewel-hued satins and strass.

An evolution of Louboutin’s famous Love Shoe came in a mélange of mismatched beading on velvet slippers, while the designer reimagined his women’s Loubitag concept with maximalist graffiti designs rendered in paillettes on the panels of sneakers.

After dark – aka the constellation-inspired Loubi in the Sky story – it was all about 3-D jacquards, blinding flashes of strass, laser-cut metallics and complex paillette designs resembling iridescent fish scales. Deco metallic heels took their cue from the dramatic casing of the label’s cosmetics line.

Click through to see a selection of styles from Christian Louboutin’s fall ’18 men’s collection.