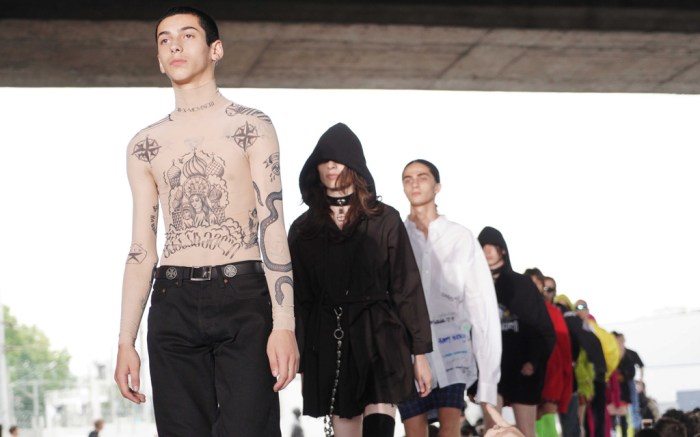 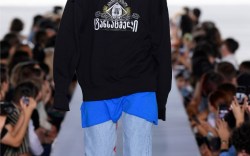 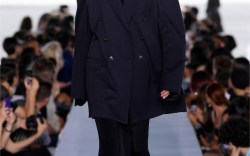 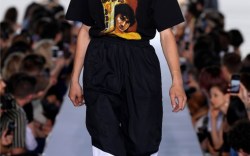 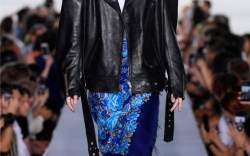 The spring ’19 collection presented today in Paris revisited his experiences growing up in a war-torn Georgia, fused with contemporary issues closer to home. “I told my shrink that she should come and see the show because it would open a lot of doors and unanswered questions,” he quipped backstage. He was only half joking.

Some of his heels featured upside down versions of iconic Paris landmark the Tour Eiffel. These symbolized a time of change and hinted at concerns over French nationalism (“I like the idea of the Eiffel Tower being upside down as the time has come for it “), however, there was also a more practical reason behind the design.

“We use the same shapes of shoes every season because we can’t afford to make new ones all the time so the heel is a Vetements trick to redesign a shoe,” he admitted candidly. “We bought them here in Paris, they are keyrings, very cheap ones” –  think his Bic lighter 2.0.

Other heels were slightly more expensive, but bang on the money nonetheless. They involved coins of indeterminate currency, all glued together to form a stack. Gvasalia fans will recall the banknote boots print boots he created a few seasons back for Balenciaga.

Notions of violence, meanwhile, played out in combat boots and Reebok sneakers customized with oversize spikes which may or may not actually constitute an offensive weapon.

There was  indeed an element of catharsis involved but while the Georgia of Gvasalia’s youth was certainly troubled, he said that it also shaped him creatively. Case in point, he explained his brand’s relationship with outsize sweatshirts: “I wore oversize hoodies as they were hand me downs from my cousins who had more money.”

These days they are also a tool for communication and education. Some of the prints react to an app that he’s developed; scan the tattoo print in the first look and you’ll be directed to a Wikipedia page about genocide. Others feature a Russian curse phrase which he said defies translation. Just as well because by all accounts it is far too naughty for publication.

Click through the gallery to see Vetements’ full collection.

These Couture Heels by Diego Dolcini Are Made From Baccarat Crystal