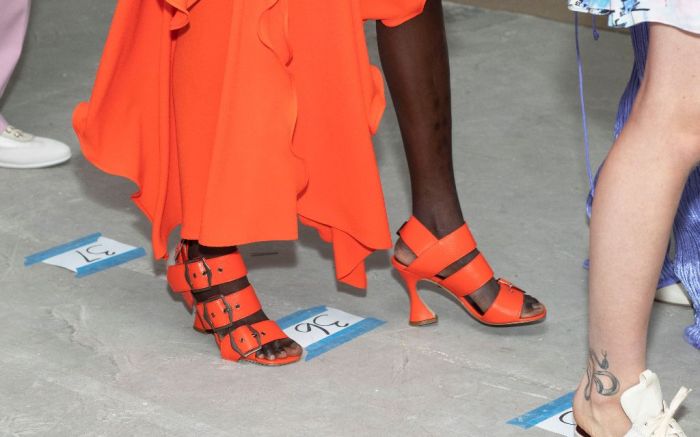 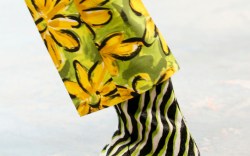 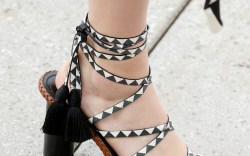 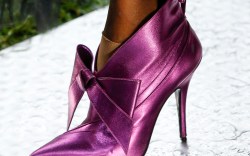 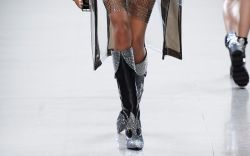 With New York Fashion Week officially wrapped, here are FN’s picks for the top 10 shoes of the spring ’19 season:

The designer’s spring ’19 collection had plenty of vacation-friendly motifs, from printed florals to ’60s brocades to abstract animal prints, done in a mix of neons and vintage colors. All were incorporated into footwear, including this pony-hair boot in black, white and neon green animallike stripe, which was paired with a zany flower print.

Designers Laura Kim and Fernando Garcia also had travel on the brain, and their flat sandals with vacation vibes were even paired with Oscar’s evening gowns. This black and white leather sandal had the best details: a cylindrical stacked heel, tassels on the leather ties and braided leather outlining the sole.

Laura and Kate Mulleavy brought their couture-level creations back from Paris to New York Fashion Week, and the result was even more heavenly than the last time, with endless layers of tulle and lace, elaborate floral headpieces and footwear with exaggerated bows.

The British designer paired up with Giuseppe Zanotti for the footwear in his spring ’19 collection, which included heels wrapped in fake gold watches, sandals trailing with feather plumes and these crystal studded boots with a Western motif, which was Cowan’s choice for show attendee Christina Aguilera. “She’d look major in that,” he told FN.

The designer ended NYFW on a gloriously high note, with ruffles, feathers and bows galore, plus a series of satin heels with a curled ribbon detail on the toe, which were paired with sparkly lurex stockings.

The British designer showed a series of shell-accented shoes, including these wedge sandals, done with braided black leather on the forefoot and hand-applied inlaid abalone shell for an exquisite statement heel.

The global-minded designer showed the most colorful collection of NYFW, which included these yellow patent leather heeled sandals with feathers trailing the ankle, one of the happiest shoes of the week.

Creative director Sander Lak (the CFDA’s most recent emerging-designer winner) showed some of the best footwear of NYFW in his color-saturated spring ’19 show (his fourth collection showing footwear for market), including this pair of neon orange sandals, which had multiple buckle details and a sized-down version of his signature curved pedestal heel.