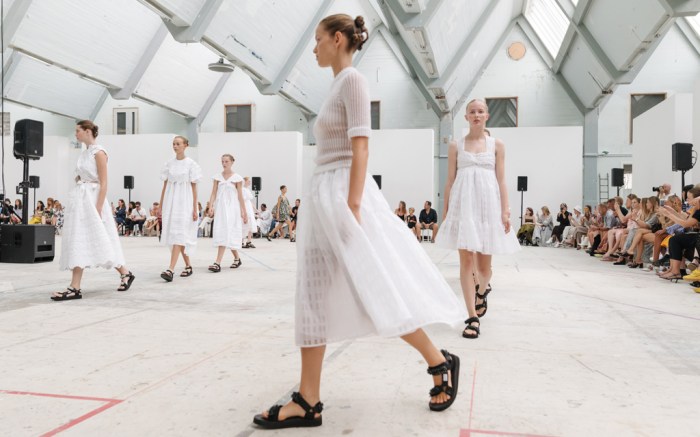 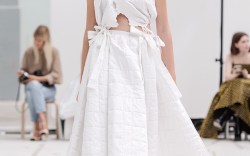 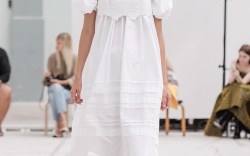 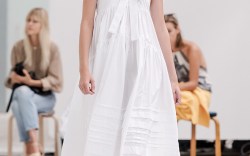 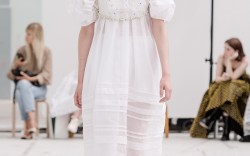 Japanese brand Suicoke is no stranger to the global fashion world.

The sandal-maker has been a feature in Palm Angels’ runway presentations, and it has collaborated with numerous streetwear players including Stussy, Slam Jam and, quite recently, Tyler the Creator’s Golf Wang label.

But Suicoke’s latest catwalk appearance might be its most surprising.

Known primarily for its sporty men’s sandal styles, the brand teamed up with Danish designer Cecelie Bahnsen to create a feminine interpretation of its popular two-strap Depa model.

The sandals debuted Wednesday on models walking in Bahnsen’s spring ’19 runway show at Copenhagen Fashion Week and served as a striking contrast to the series of soft and sweet dresses.

For her set of flirty floral-print dresses, the designer matched them with a basic Depa sandal featuring unadorned nylon straps. But for other looks, such as this all-white quilted two-piece, she chose to add more interest, pairing them with custom versions of the sandal that were adorned with black and white pearlized and crystalized embellishments.

“This season, I was still thinking a lot about sculpture, which you see in the silhouettes,” Bahnsen said in a statement. “I was also looking at a photo book, ‘Assembly,’ by the Japanese photographer Osamu Yokonami. His photos show groups of girls together all wearing the same clothes, mostly their school uniforms. They are collective portraits, but you notice each girl’s distinct personality and identity. That really speaks to me about what we do.”

While sport sandals remain a polarizing fashion choice — for both sexes (but especially men) — they have been omnipresent so far during the spring ’19 runway shows, suggesting that we’re in for at least another season of Velcroed summer footwear. And quite possibly, some cool women’s sandals from Suicoke.

Click through the slideshow to see Banhsen’s entire spring collection.