Jeremy Scott Wants You to Know the ’90s Are Back 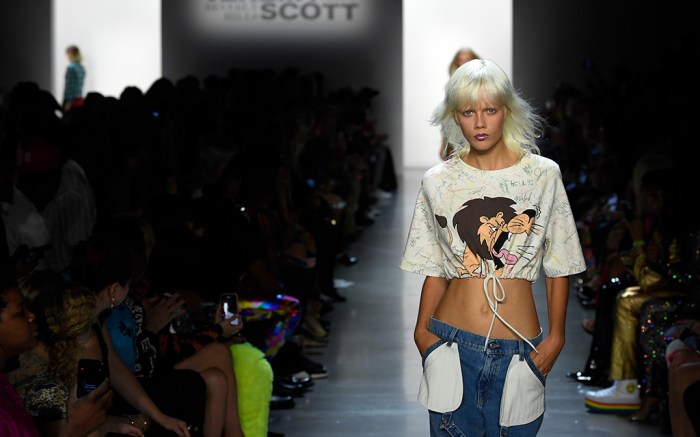 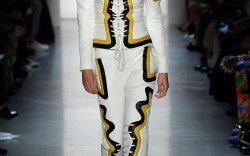 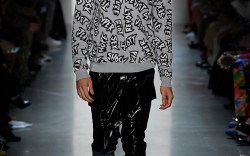 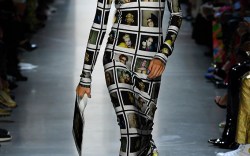 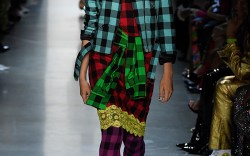 You name it, chances are it could be found in Jeremy Scott’s spring ’19 NYFW runway show (especially if it has roots in the ’90s). Studs, rhinestones, PVC, plaid, graphics, patchwork denim, mesh — you get the point. The designer inundated the audience on Thursday with a blast from the past featuring grungy looks complete with plaid button-downs tied around the waist, NBA-inspired streetwear and shades of neon yellow, pink, green and blue serving as real-life highlighter marks throughout.

Attempting to even just get into the show was quite like the runway itself: haphazard, all over the place and a colorful ensemble marching toward cohesiveness. Merely a classic case of life imitating art? Erratic or not, at least one thing was clear — Scott’s usual wacky aesthetic reigned supreme and perhaps hit harder than ever before, especially where footwear was concerned.

Based on his key message, overall boots may be the next thing in footwear. The shoulder-to-toe contraption initially invokes a “what are those?!” reaction, but after a flurry of colorways in acid yellow, patent black and even denim, the idea is worth reconsidering. To be fair, Rihanna has already hit on a similar concept with her pelvis-high denim boots in collaboration with Manolo Blahnik. It wasn’t the only Rihanna reference point for Scott, however. He also sent down a myriad of color-block booties reminiscent of the singer’s Fenty Puma collection.

Scott also looked inward for inspiration, revamping his usual oversized moon boot styles with bold colorways and removable pads (volleyball, anyone?). And if he has anything to do with it, thigh-high PVC boots embellished with Swarovski rhinestones paired with a matching cropped jacket will be the look of next season.

The ’90s influence was dialed in with the prints, namely the Pikachu cartoon featured on hot-pink sweater fabrications. Surprise runway guest Offset of Migos modeled one iteration of the idea, while his bandmate Quavo and his beloved Cardi B supported from front row.

As is the leading trend these days, the designer ended the show on a political note wearing a simple white graphic T-shirt with the words: “Tell your senator no on Kavanaugh,” front and center. If the ’90s message didn’t ring clear, perhaps his stance on one of today’s hot topics would.

As far as clothes are concerned, all in all, the designer’s inventiveness never wavered. Practicality, on the other hand, is another question.