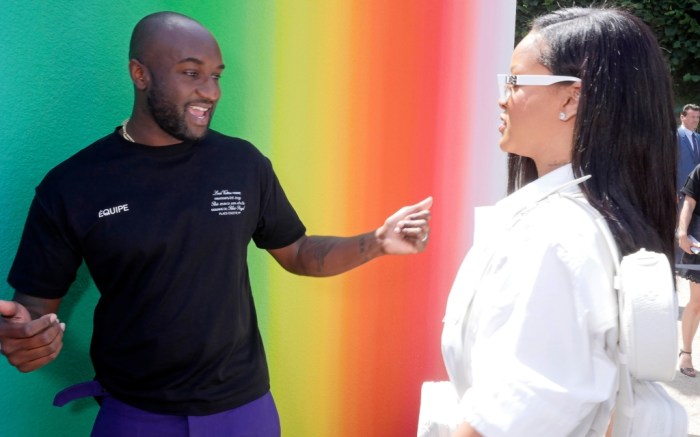 The spectacle that was the Louis Vuitton menswear show featured the ultimate fashion frow. Today in Paris, Kim Kardashian, Kanye West, Rihanna, Naomi Campbell and Bella Hadid, (dressed in a riot of colorful outfits), all lent their celebrity star power to support Virgil Abloh’s debut collection for the French titan.

The collection, dubbed “Color Theory,” took its cue from the explosion of hues that happens when white light hits a prism. Looks started off in white and segued through pink, red, orange, yellow, green, blue, purple and finally silver. Likewise, the footwear.

Mainstay shoes were vintage LV runners in suede and skater-style kicks that came in both low and high-top versions, running the gamut through all the colors of the rainbow. This attendant notion of travel was Abloh’s nod to the origins of the house as a malletier, or trunk maker for grand voyages.

The 200-meter runway, which ran the entire length of the Jardins du Palais-Royal, was similarly color-graded, and on every seat was a Vuitton collectible T-shirt encased in a plastic tube like a time capsule, matching the shade of its section.

Abloh explained in an Instagram post that he started his career without attending fashion school, likening himself to a “blank T-shirt,” with “a screen-printed idea for it and a dream.” Of the tees, he said he had them made when he first joined the house — “once I learned how to use the photocopier in the office.”

It’s true about his lack of official fashion education. But what he might be wanting in formal training he recoups with his own unique skill set — a background in engineering and architecture, informed by his work as a DJ and membership of Kanye West’s creative agency, Donda.

In 2018, luxury fashion isn’t about reinventing the wheel, and his particular blend of personality cult and turntable remix skills makes Abloh the perfect man for the job. Coming from a place outside of the golden circle of fashion elite also makes him sensitive to inclusivity, and to this end, he invited 700 students from Paris’ design schools to attend his show.

Together with the shirts, each guest also received a mini dictionary dubbed “The vocabulary according to Virgil Abloh.” So what’s his definition of shoes? “The wardrobe component most immediately indicative of an era or movement, each shoe design finds its origins in a sports or vintage culture from 1960s Chelsea boots to the golden era of 1980s basketball trainers.”

Likewise, socks are “an unsung everyday necessity first covered in rhinestones by Michael Jackson in 1983, inspiring a generation of kids to elevate normality. As a child, Virgil Abloh became an early appropriator of the glitter sock.”

Typically polymathic, then, he hasn’t just designed a collection; he’s written the book on it.

For every look from the collection, check out the gallery.