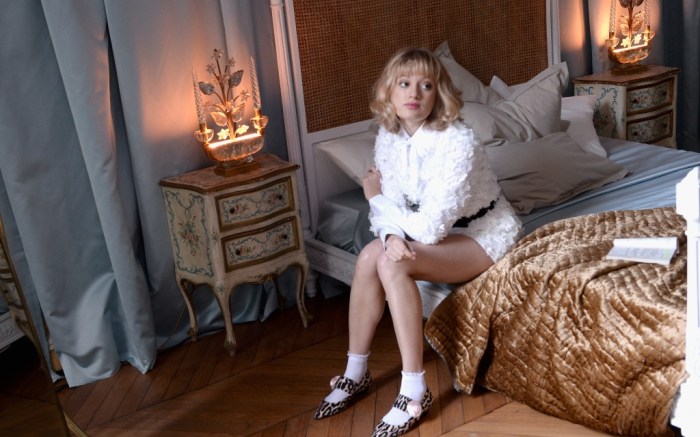 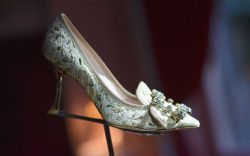 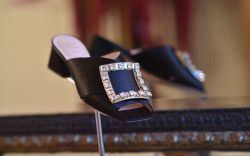 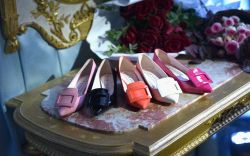 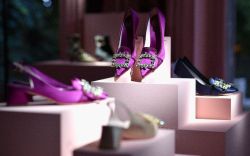 It was a new beginning for Roger Vivier at Paris Fashion Week today — and the legendary French label had the perfect backdrop for creative director Gherardo Felloni’s official debut.

Checking into “Hotel Vivier,” an ornate private residence-turned-presentation space, was quite the experience. Each room featured a different female creative who was engaged in a specific craft.  For example, in one room, an aspiring  actress practiced her lines. In another, a lyrical singer serenaded the crowd (with four pups beside her on a bed.)

“I chose a hotel made by women and owned by women. I had a chance to create characters that I love,” said Felloni in the expansive garden out back. Back inside, the shoes from his first collection were displayed in each of the rooms.

The star of the show was the remake of the Belle Vivier pump, made famous in 1967 when Catherine Deneuve wore them with a trench raincoat in “Belle de Jour.”

Renamed the Très Vivier, the style is “chunkier, younger and a little bit retro,” Felloni said. The heel is trapezoid, the rectangular buckle supersized, flattened and squared off. The heel was incorporated across pumps, loafers and booties. (Bags from the collection also were decked out with the oversized buckle treatment.)

The Viv’ Run sneaker features the classic Vivier buckle, albeit reimagined in rubber, double flyknit overlay and a 7-centimeter choc-style wedge. “Roger Vivier was a genius with heels,” Felloni told FN in an exclusive interview before the preview. “If was alive today, he would never have a made a flat sneaker.”

Other highlights included a pale pink slingback pump made of crushed velvet with an ostrich feather accent. Meanwhile, a pump in raspberry satin featured an oversized bow.

For Felloni, who previously headed up accessories at Miu Miu, the big debut marked a significant milestone.

“Working for Vivier has always been one of my dreams,” he said. “[The namesake] was a genius, and I’m sure he invented everything in shoes.”

For more from the spring ’19 collection, click through the gallery.