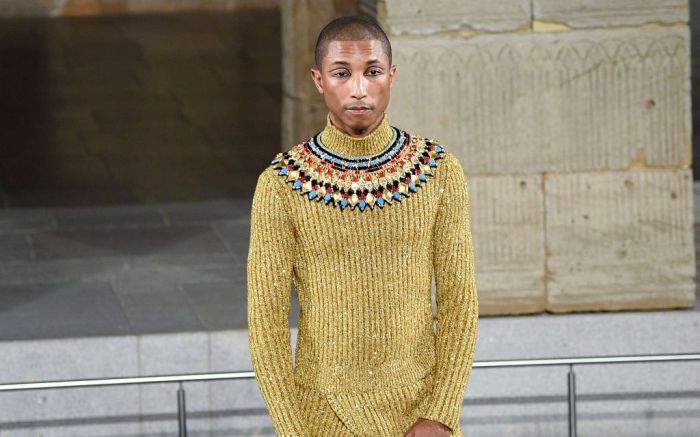 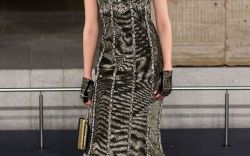 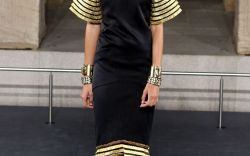 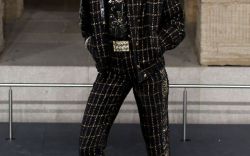 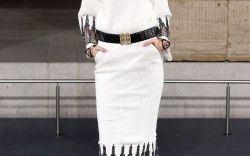 Is it Pharrell — or Pharaoh? Pharrell Williams stole the show Tuesday night at Chanel’s Metiers d’Art extravaganza, which was held in New York at the Metropolitan Museum of Art and had a very museum-worthy ancient Egyptian theme.

Williams has long been a friend of the Chanel family, sitting front-row with wife Helen Lasichanh at the French fashion house’s elaborate shows around the world, creating highly coveted sneakers under the guidance of Karl Lagerfeld and Adidas, and even designing a capsule collection with the brand, set to debut in March 2019. And so for the latest Chanel show, it was only natural for Williams to return to the runway.

The musician and designer stepped out in an all-gold ensemble that perfectly encapsulated the theme, right down to his gilded boots and Cleopatra-inspired kohl eyeliner that he wore on his eyelids.

There was gold everywhere on the runway, and especially on-foot. Many of the looks featured gold leather boots embellished with costume jewelry on the heels and stamped in a crocodile print (the brand recently announced that it would stop sourcing exotic skins). From afar, the boots looked like thigh-highs, but a closer glance revealed them to be under-the-knee boots — and gold spray-painted legs.

The various gold boots were a perfect match for the collection’s covetable handbags, which were also done in various gold materials, from tweed and classic chain links to bejeweled resin clutches and hand-painted styles.

Chanel’s annual Metier’s d’Art show is known for highlighting the craftsmanship of the many specialty workshops that the brand works with — and some of which they have bought in the past decade as a way of preserving the unique, handmade techniques (known in French as savoir-faire) of the studios. That includes fabric flower specialist Lemarié (which produces the house’s iconic camellias), costume jeweler Goossens and master shoemaker Massaro, which began producing Chanel’s two-tone brogues in 1957.

Last year, Chanel announced that it would be building a center dedicated to housing its various Metiers d’art. The five-story structure located in the outskirts of Paris is set to open in 2020.

Click through to view every single look from the collection.

From Lily-Rose Depp to Margot Robbie, See What the Stars Wore to the Chanel Metiers d’Art 2019 Show

Pharrell Williams and Chanel to Launch a Capsule Collection