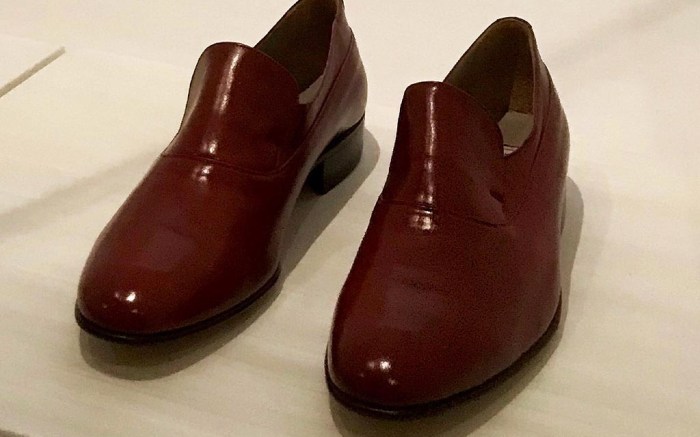 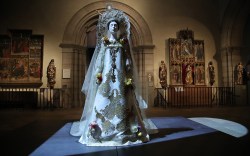 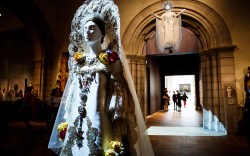 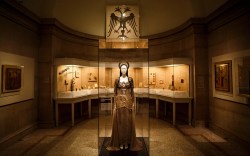 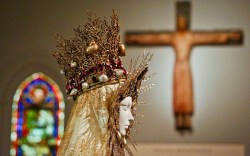 To witness this year’s exhibition, one must undergo a pilgrimage of sorts.

That’s the leitmotif behind the Metropolitan Museum of Art’s Costume Institute’s spring display, “Heavenly Bodies: Fashion and the Catholic Imagination,” which runs in New York from May 10 to Oct. 8 and marks the largest show the institute has assembled at the  museum.

Along with more than 150 designer ensembles, the masterworks, encompassing more than 15 papacies from the 18th to the early 21st century, include a pair of red leather loafers designed by Vatican-favorite cobbler Adriano Stefanelli.

“They belong to a papal tradition that dates back centuries; their color signifies the blood of Christ’s passion as well as the blood of Catholic martyrs,” explained Andrew Bolton, the Costume Institute’s head curator, adding that Pope Benedict XVI’s footwear of choice earned him the title “Accessorizer of the Year” from Esquire in 2007.

The exhibit spans from the Met’s Byzantine and medieval art galleries to the Anna Wintour Costume Center and the Met Cloisters in northern Manhattan. It explores the works of designers inspired by the Roman Catholic faith as well as around 40 ecclesiastical garments and accessories from the Sistine Chapel sacristy — a number of which had never before left the Vatican.

With the thematic exhibition focused on the ongoing dialogue between fashion and the devotional practices and traditions of Catholicism, it’s only appropriate that the centerpiece of the gallery is the group of papal robes and accessories that traveled from the very headquarters of the Roman Catholic church. The collection highlights the lasting influence of liturgical vestments on designers such as Dior’s John Galliano and Donatella Versace, who is one of the hosts for tonight’s highly anticipated gala.

“In the Catholic imagination, the truth, goodness and beauty of God is reflected all over the place — even in fashion,” said His Eminence Timothy Michael Cardinal Dolan Archbishop of New York at a press preview today.

What You Need to Know About This Year’s Met Gala

How to Watch the Met Gala Red Carpet

Most Dramatic Looks From the 2017 Met Gala