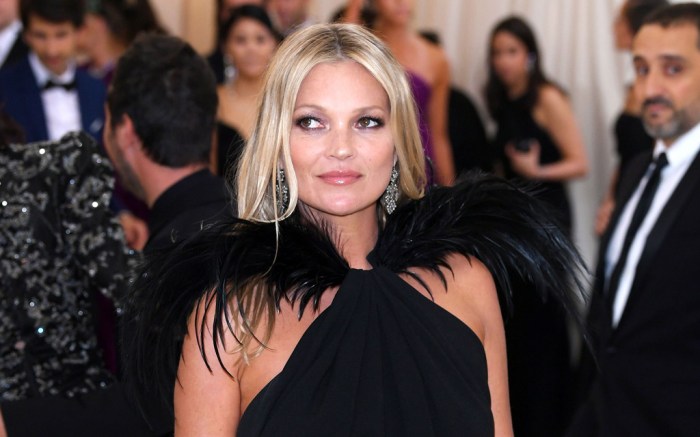 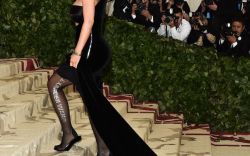 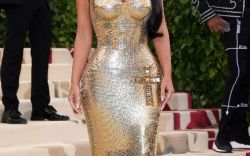 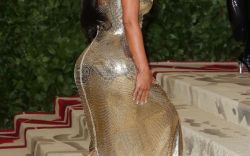 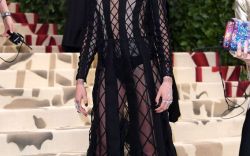 Kate Moss has always known how to make an entrance — and the supermodel is making a case for lots of leg and soaring heels at tonight’s Met Gala in New York.

Moss, who is making her first appearance at the event since 2009, is a guest of Saint Laurent designer Anthony Vaccarello. She’s wearing a feathered Saint Laurent mini dress and strappy sandals that translated into a showstopping shoe look.

It’s no surprise that Moss is donning Saint Laurent for the big night. Last September, Moss sat front row at the French house’s spring ’18 show in Paris, and a few months later she appeared in the label’s spring campaign.

For the Met Gala in 2009, the model accompanied designer Marc Jacobs, wearing a shimmering gold dress with a matching headpiece and platform stilettos.

Moss has been making major sartorial statements at events for decades.

In 1993, for example, the cover girl stepped out with Naomi Campbell for the British Designer of the Year Awards wearing a lavish oversized fur-trim coat with a miniskirt, a white top and black patent multicolored brogue-inspired platforms featuring lace-up detailing.

For more huge style statements at the Met Gala, click through the gallery.