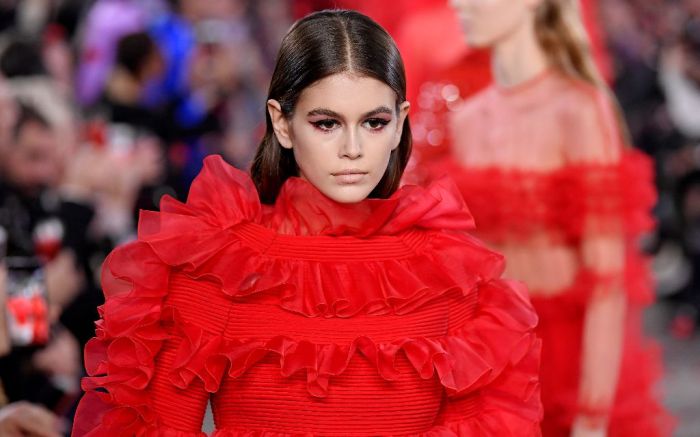 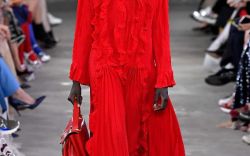 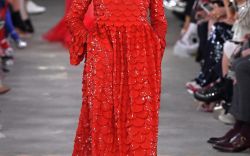 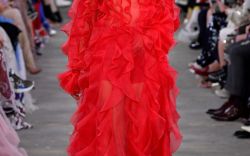 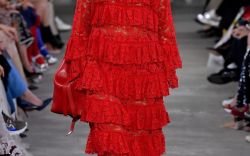 In Japan, the sun is considered red, not yellow, and it’s symbolized by the red circle on the country’s flag. Fittingly, Japan is known as the “hinomaru,” or “land of the rising sun.”

The color is also immensely significant for Valentino, which held its pre-fall ’19 runway show in Tokyo on Wednesday. Red has long been known as the brand’s (and its founding designer’s) signature color, in a unique trademarked shade that’s composed of 100 percent magenta, 100 percent yellow and 10 percent black.

Since Valentino Garavani debuted the first red frock in 1959, a gown or dress in the signature shade has been included in every collection, and there were more than enough red ensembles to go around in the latest Valentino collection. Of the 90 looks shown on the runway, 28 were done in all red, from the lace and tulle dresses down to the cashmere socks, strappy pumps and lace-up boots. Kaia Gerber was given the honor of wearing one of the red looks, closing the show in a stunning gown covered in cascades of ruffles.

While Valentino creative director Pierpaolo Piccioli did delve into the brand archives a bit for the show (using vintage prints redone in saturated red and referencing a flower-adorned dress that model Marisa Berenson wore for a Vogue shoot in 1968), much of this collection’s ethos derived from Japan.

“I felt that this idea of wabi-sabi, the kintsugi (the Japanese art of repairing broken pottery with gold lacquer), are very close to my idea of beauty. So for me that was the real connection — between my vision of beauty and the Japanese culture,” Piccioli told WWD at the show. “I wanted to understand the deeply real connection I had with the Japanese culture, and so I worked on that because I felt this is an opportunity for me to show a relevant collection as a pre-collection both for men and women.”

This runway show, which included a noticeable increase in Asian models, was the first time the brand showed pre-fall for men and women together.

Click through to view every look from Valentino’s pre-fall 2019 collection.

Valentino’s Spring Flats With Detachable Plumes Are So Serena Williams