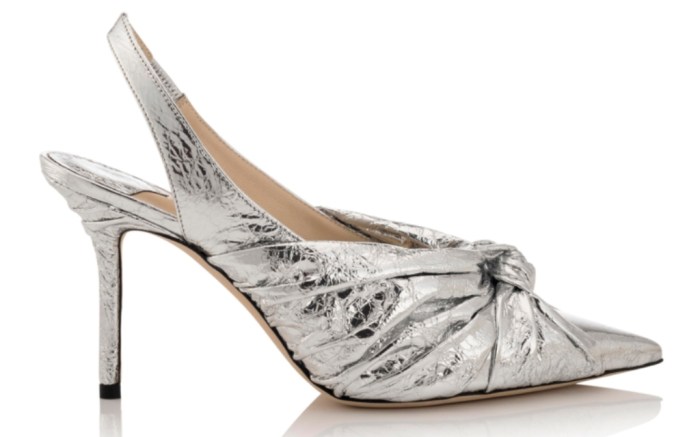 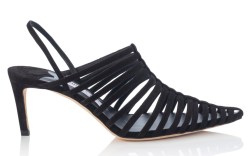 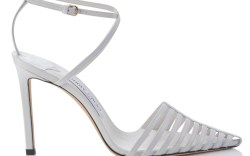 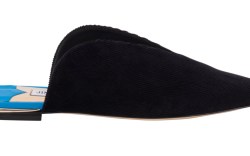 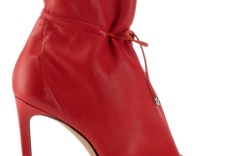 The Jimmy Choo woman is no shrinking violet — and Sandra Choi wants her to feel bold and empowered for spring ’19.

“This is a collection for standing tall, unafraid and unbowed. I’ve focused on evoking a real drama in the structure, sculpting the forms and cut of the uppers and creating a harmonious balance in the proportion of the whole,” Choi said, noting that the word strength was top of mind as she designed the collection. “There is glamour, of course, but the glamour is an irreverent expression of feminine power and self determination.”

Choi told FN she wanted to create drama out of the simple elements of a shoe. She modeled her modern take on the d’orsay — a stretched silhouette with a sculptural block heel finished a slick caramel patent leather. “It’s for the girl who wants to be able to move, but who’s still standing tall and looking divine,” said Choi, who noted that she was inspired by ’80s couture.

Other standouts included a caged slingback with crystal applique, backless mules with buckled straps and a series of pointy-toe slingbacks, both heeled and flat, with gathered fabric knots draped in the center.

While the brand isn’t revealing photos of its dramatic new sneaker — out next month — they’re sure to be Instagram favorites. The bejeweled kicks feature a diamond-inspired translucent sole that took more than a month to develop.

“They almost blinded everyone,” Choi joked. “We wanted to create the ultimate sneaker that [would have the effect] of stepping into a diamond. It’s mesmerizing.” (Metallic and laser cut versions of the style will follow for spring.)

Several other new sporty styles were on display, including modern runners finished with fabric uppers that include linen and glitter mix. Choo also unveiled its own take on the skate sneaker.

In addition to delving deeper into sneakers, the label also is smart about expanding the depth of its tried-and-true styles. The Minny sandal, which has been a red carpet favorite for years, will now be stocked in more colors. Another classic minimal evening sandal, the Mimi, features an intertwined ankle strap that twists its way around the foot.

Indeed, Choi continues to deliver product that women actually want to wear. The strong collections are driving the brand’s impressive growth, according to CEO Pierre Denis. “We have good momentum in the China and the U.S., and are omnichannel efforts are [paying off]. Integrating the physical stores with digital has been successful. So we can’t complain.”

Click through the gallery to see highlights from Jimmy Choo’s spring ’19 collection.