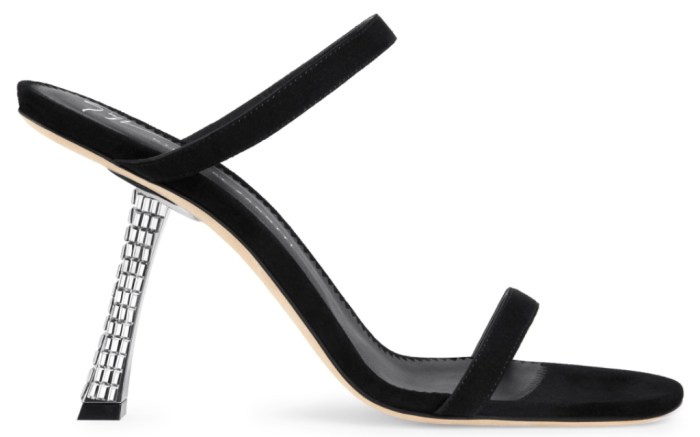 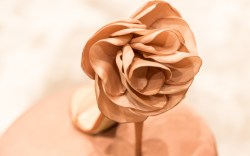 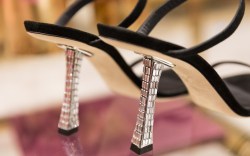 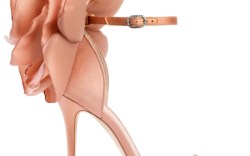 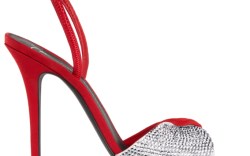 The presentation had it all: sophisticated yet wearable heels, attention-grabbing crystal and floral embellishments — and Zanotti’s unexpected collab shoes with rising New York designer Christian Cowan. Zanotti also displayed his Michael Jackson “Tribute” sneakers — first unveiled in August — and showed off the legendary musician’s original “Bad” jacket, which had its own bodyguard.

The veteran designer — who has a serious passion for music — said that as he looks ahead to his 25th anniversary in 2019, he’s also reflecting on the past and examining his rich archives.

Zanotti has always been known for his affinity for embellishments — and he presented a classic sandal with an asymmetrical crystal heel. “Twenty four years ago, this [type of heel] wasn’t so normal. Now it’s very normal,” he observed. “Crystals, diamonds, they’re in my blood.”

Another one of the designer’s favorites was a sandal adorned with an oversized peony.

Equally noteworthy was the designer’s expansion of the collection into more sophisticated daytime sandals and mules with lower heels. While Zanotti is often associated with glamorous evening looks, it’s clear the designer understands the opportunity to attract consumers who want a more versatile shoe.

“This is a new direction for us. We never had these heel heights before. We only did the sexy high heel or the flat,” said Alain Baume, president and CEO of Zanotti’s U.S. business. “Those are still there. But we want [our customers] to wear the shoes more hours of the day and more days of the week.”

To see more from the Giuseppe Zanotti spring ’19 collection, click through the gallery.