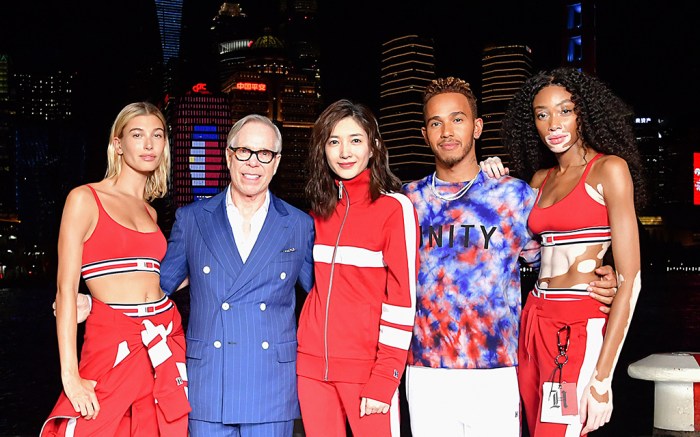 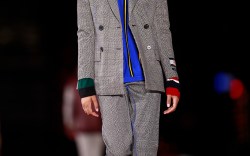 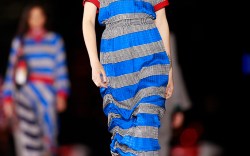 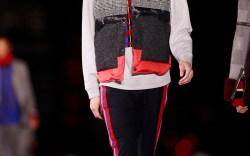 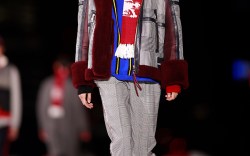 It’s all about the archives this season and Tommy Hilfiger is leading the pack. The designer unveiled his fall ’18 collection in Shanghai today with help from Lewis Hamilton, Winnie Harlow and Hailey Baldwin.

Set along the Bund, Shanghai’s historic waterfront, with the city’s colorful skyline as the backdrop, Hilfiger made quite the impression for his fifth see-now, buy-now show.

FIA Formula One racing champion Hamilton was on hand to debut the first Tommy x Lewis capsule collection, which has been buzzing around social media this past month. The two announced their partnership earlier this spring and his collection, which fuses sport and street, finally made its way on the runway.

His Logo and Loyalty slide sandals made a statement as did the utility and zip-up boots, which are all available to purchase online now.

Another highlight of the show came from Tommy Icons, a capsule collection, which celebrates the brand’s most iconic styles along with leaders of tomorrow. Baldwin and Harlow walked the runway as they were named faces of the line and ambassadors for the brand in May.

And as far as the fall ’18 Hilfiger collection goes, the designer went back to the ’80s for inspiration featuring oversized garments, sequined tracksuits, colorblocking and a heeled hiking boot.

Shanghai set the stage for an unforgettable night with @TommyHilfiger, #Chanyeol, #TaeYeon, and the man of the hour, @LewisHamilton ✨ #TommyNow #TommyXLewis #IconsOfTomorrow #TommyHilfiger pic.twitter.com/CnGhGQ2Y5w

Both Hilfiger and Hamilton closed the show together, which featured more than 100 outfits.

Click through gallery to see all the runway looks.