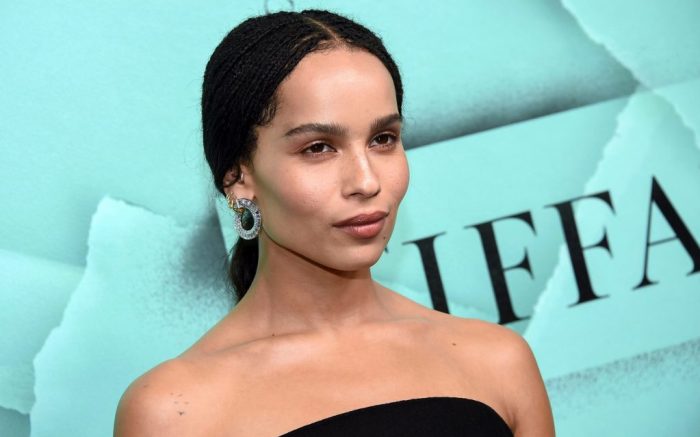 Zoë Kravitz got creative for her Halloween costume this weekend, piecing together a facetious “mornings suck” vampire outfit that comprised a pink fluffy towel, a long red robe layered over a tank and boxers, a pair of Seinfeld logo shin-length socks and Gucci Princetown fur-lined slides (that retail for $995). Other accessories included crystal-tipped shades, a stack of newspapers, a smiley face mug — and an enormous ring on her left hand.

As it turns out, she’s been engaged all this time — eight months, in fact. In a recent Rolling Stone cover profile, she reveals that her fiancé, Karl Glusman, her boyfriend of nearly two years, proposed in February.  “Oh yeah, I’m engaged. I haven’t told anyone yet — I mean, I haven’t told the world,” she revealed. “I wanted to keep it private.”

Initially, Glusman had wanted to propose in Paris but ended up popping the question in their living room. “I was in sweatpants,” Kravitz recalled. “I think I was a little drunk. I could feel his heart beating so fast — I was like, ‘Baby, are you OK?’ I was actually worried about him! I love that it wasn’t this elaborate plan in Paris. It was at home, in sweatpants.”

The Rolling Stone cover is also making the rounds on the internet. A nude Kravitz is seen gracing the magazine’s November issue, an image that pays homage to her mother Lisa Bonet’s 1988 Rolling Stone feature spread. “Life | imitates | art,” Kravitz captioned on Instagram.

Click through to see more celebrities in their Halloween costumes.