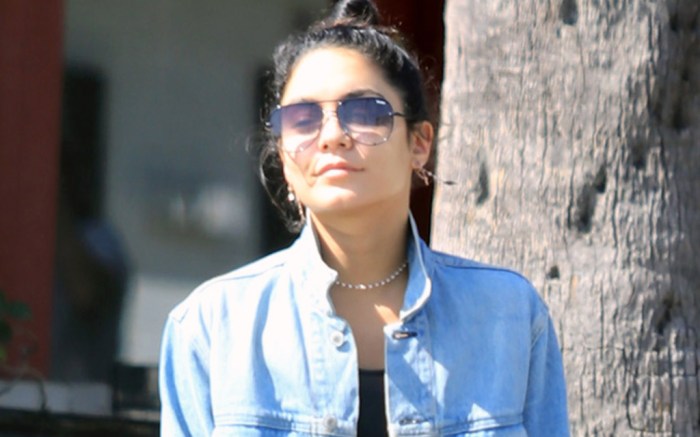 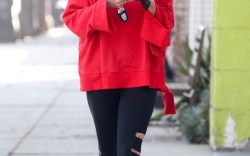 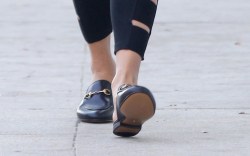 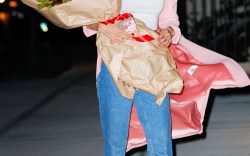 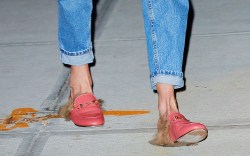 At least, not if Vanessa Hudgens has anything to do with it.

The stylish actress showed two different ways to wear the loafers in less than 24 hours while out running errands in Los Angeles.

For the first look, Hudgens selected a graphic T-shirt with a Harley Davidson logo, which she tied to show off a sliver of stomach, and black leggings. The 29-year-old completed her look with a baseball cap and tiny sunglasses.

Compared with the edgy-meets-sporty vibes of her first outfit, Hudgens’ second look had more of a boho bent. The Disney Channel alum wore an oversize jean jacket with a black sports bra underneath, and colorful printed pants.

The Gucci Princetown slippers Hudgens pulled on are a celebrity favorite, both for casual looks and on the red carpet.

With an open back, the stylish shoes are easy to throw on. The luxurious loafers feature smooth leather and an almond-shaped toe, with Gucci’s signature horsebit detailing on the upper. The shoes retail for $695 and come in a variety of colors and prints.

The style has been a celebrity wardrobe staple for more than a year — and Hudgens is one of its biggest fans.

The “Dog Days” star often slips into Gucci loafers to complete her casual looks, proving that the style works well with athleisurewear looks.

Click through the gallery to see more stars in Gucci slippers and loafers.

Vanessa Hudgens Is the Latest A-Lister to Wear Marchesa — Is It Set for a Comeback?

A Look at ‘Queen of Coachella’ Vanessa Hudgens’ Festival Style