No Pants, No Problem: Tinashe Goes Clubbing in a T-Shirt With Sensual Thigh-High Boots 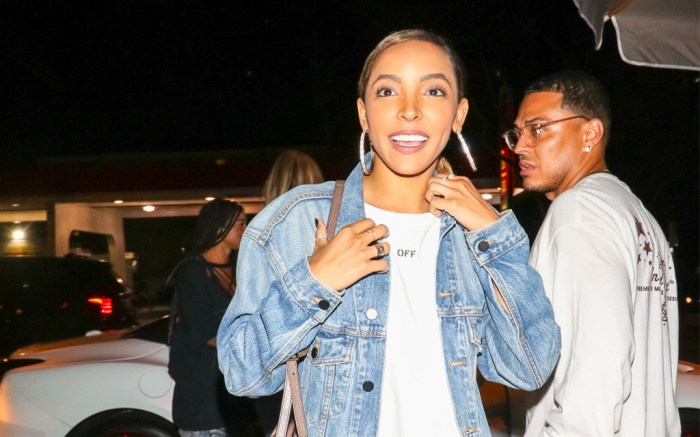 Tinashe stepped out Wednesday in L.A. wearing an outfit that confirms that pants are so overrated.

The singer was enjoying a night out at the trendy Delilah nightclub when photographers caught her leaving in over-the-knee cage boots. The gray shoes featured a sky-high heel and a lace-up back.

The boots were just one of many daring elements in Tinashe’s party look. The no-pants style was paired with an Off-White Youth Spliced T-Shirt worn as a dress and matched with a jean jacket, glimmering hoop earrings and a Gucci bag.

The back of the jean jacket was embellished with the phrase “Party Animal,” something the entertainer proved true by posting on her Instagram story at the end of the night. She captioned the post “Havn’t slept in a month,” but her fabulous appearance made such a statement hard to believe.

Seen coming and leaving the event in a white, sleek sports-car, Tinashe seemed at ease while surrounded by friends the entire night, though her kicks definitely stood out in the crowd.

On Thursday the “2 On” singer was named to the 2018 Maxim 100 List, ranking among the likes of Kate Upton and Emily Ratajkowski. The annual list honors the hottest female celebrities.