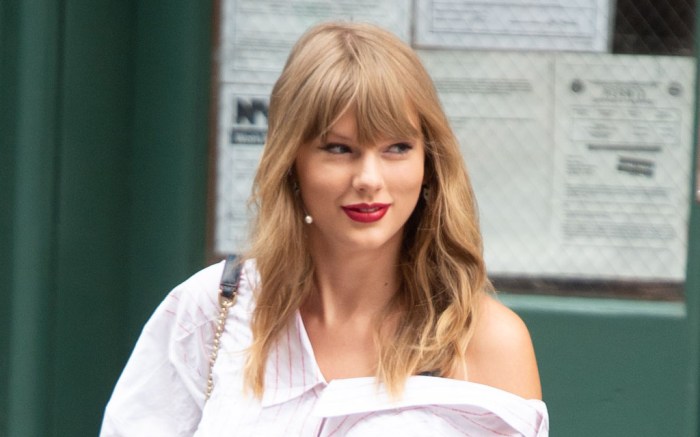 Taylor Swift flaunted her long legs in teensy denim shorts as she headed to the last of a three-concert series at MetLife Stadium in East Rutherford, N.J., on Sunday.

The “Ready For It?” singer sported an oversized button-down shirt that she wore off her shoulder, which she paired with the tiny, heavily distressed jean shorts.

For footwear, Swift selected Tod’s black leather Infilature boots that added an edgy element to her ensemble. The ankle boots featured a chunky heel, with prominent red and white stitching.

The singer wore her blond locks down, and opted for her signature red lipstick.

Although Swift has remained largely out of the spotlight for the past two years — making few red carpet appearances and staying out of paparazzi shots — the star has been caught on camera more frequently during her current trip to New York, where she’s had friends such as Gigi Hadid, Emma Stone and Lily Aldridge show up for her MetLife performances.

In the middle of her “Reputation” tour, Swift is set to star in an upcoming film version of the Broadway musical “Cats,” alongside Jennifer Hudson, Ian McKellen and James Corden. While the 28-year-old is primarily a singer-songwriter, not an actress, she has dabbled in acting before, starring in films including “Valentine’s Day” and “The Giver.”