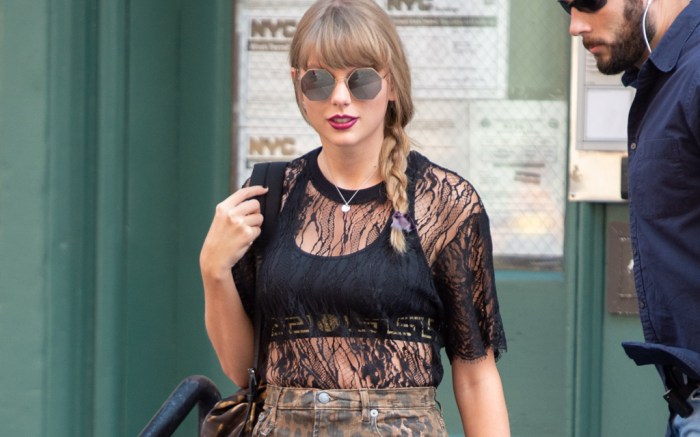 Taylor Swift has made the best of her time this week in New York, stepping out in all sorts of looks. Today, she headed out ahead of the next stop on her concert tour wearing a lace top and lots of leopard prints.

The “Reputation” singer chose an R13 distressed leopard-print skirt matched with a sheer lace top. Under the blouse, you can see through to her Versace-emblemed bra. Swift has been all about short shorts and cropped skirts recently, almost giving paparazzi a glimpse of a wardrobe malfunction walking down the stairs.

For footwear, Swift went for a pair of black sandals with a block heel. The shoes feature a studded, leather front with silver accents; it recalled a pet’s collar.

She continued her leopard motif with a backpack covered in the print thrown over her shoulder. The musician’s outfit is perfectly timed to the recent news that she is starring in an upcoming movie adaptation of the musical “Cats,” FN’s sister publication Variety reported. And it’s only fitting because Swift is a huge self-proclaimed cat lady.

Fans drew attention to the silver chain around her neck, engraved with a “J” for her boyfriend, actor Joe Alwyn. She was first spotted wearing the necklace in October.

Her “Reputation” tour continues tomorrow at the MetLife Stadium in New Jersey after a four-day break since her last performance.