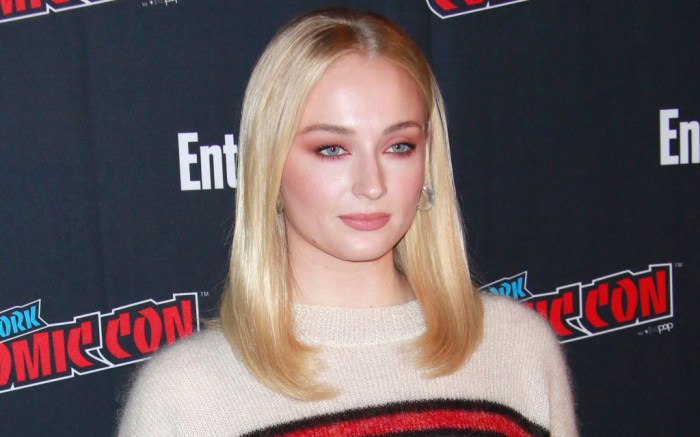 The 22-year-old stepped out in a cozy striped sweater that she wore tucked into a pair of shiny black leather pants. The form-fitting pants featured exposed silver-tone zippers at the waist and side pockets.

For footwear, the “Game of Thrones” star selected strappy Jacquemus pumps with a pointed toe. The $510 shoes feature a sculptural high heel and an ankle strap with side buckle fastening.

On Friday, the “X-Men” actress sported a low-cut black top with bell sleeves and high-waisted dark jeans. For footwear, she selected cream-colored pumps with a stiletto heel and pointed toe.

Turner appeared at Comic Con sans fiancé Joe Jonas, who she visited Paris with a week ago.

Turner opted for a look straight off the brand’s resort ’19 runway, rocking gold-bottomed thigh-high sneaker-boots with an embellished top and sparkly lavender miniskirt. Meanwhile, Jonas looked dapper in a gray suit and LV logo’d black shirt, completing his look with sneakers from the French label.

Click through the gallery to see Sophie Turner’s style with Joe Jonas.