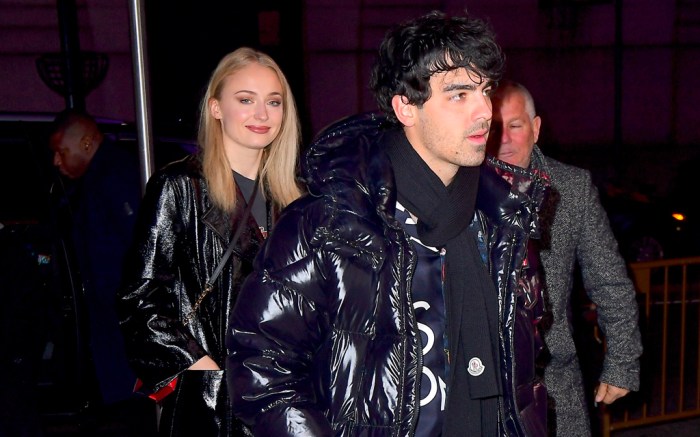 Joe Jonas and fiancée Turner, along with younger brother Nick, were captured exiting Madison Square Garden after watching the Knicks lose in a high-scoring game to the Phoenix Suns.

Joe dressed for the event in a navy and black ensemble, wearing a Moncler jacket to keep warm. On his feet, he wore black leather sneakers with a thick white sole.

The “Game of Thrones” actress layered a black patent leather trench over a Knicks T-shirt and paired it with a red cross-body bag for a pop of color. She finished her sporty-chic look with a pair of Louis Vuitton‘s $1,090 LV Archlight sneakers, which are distinguished by their exaggerated silhouette.

As for Nick, who was noticeably unaccompanied by his new wife, Priyanka Chopra, the recently married 26-year-old sported a long and fuzzy black coat over a knit hoodie and taupe pants, complete with a pair of blue-gray sneakers with a dual-tone platform sole.

Only Priyanka Chopra & Sophie Turner Can Look This Good Hungover