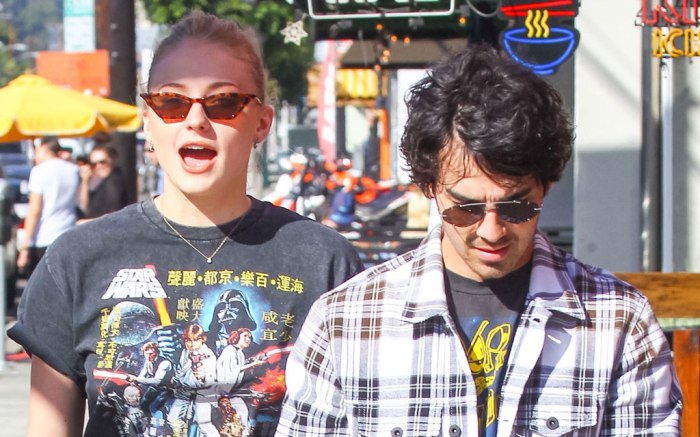 Sophie Turner and Joe Jonas went for coordinated looks as they stepped out in Los Angeles yesterday.

The “Game of Thrones” actress wore a “Star Wars” T-shirt tucked into a pair of black jeans. For footwear, the 22-year-old selected a pair of black booties, choosing a shiny pair with a low heel. She accessorized with a pair of cat-eyed sunglasses and a white bucket bag, wearing her blond locks in a messy bun.

As for her fiancé, the former Disney Channel star was clad in a graphic T-shirt worn underneath a plaid button-down and a pair of dark fitted pants. The 29-year-old chose a pair of black slip-on sneakers to complete his look.

In the evening, the duo slipped on Halloween costumes as they went to Kate Hudson’s annual Halloween party in L.A.

Meanwhile, Turner went with an elephant costume, choosing an oversized onesie that came complete with giant ears and a dangling trunk.

Click through the gallery to see Joe Jonas and Sophie Turner’s couple’s style.