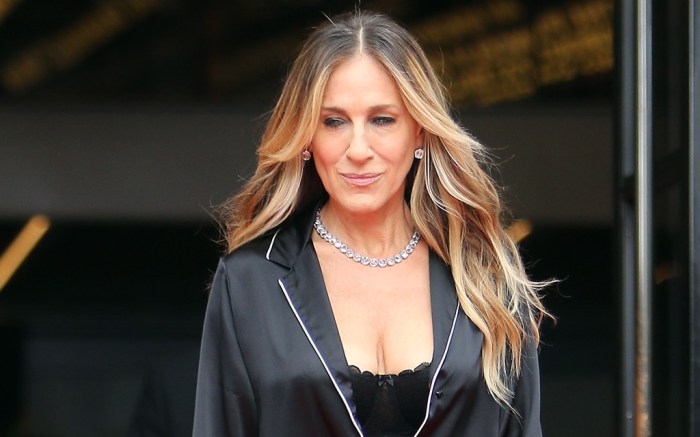 It may be 20 years since “Sex and the City” first premiered, but Sarah Jessica Parker is still taking cues from Carrie Bradshaw when it comes to her wardrobe.

While riding the subway in New York yesterday, Parker sported a black jacket with gray jeans, wearing glasses and a ponytail as she scrolled on her cellphone.

But in a Bradshawlike move, Parker added some glitter to her subway ride with shoes from her SJP Collection — and her sparkly silver booties stood out for an otherwise mundane subway ride.

The actress-turned-designer launched SJP Collection on Feb. 28, 2014, making many a “Sex and the City” fan’s dreams come true with her collection of bold heels.

In years since, Parker has expanded her brand — and she has played a hands-on role in building up her business, getting on her hands and knees to help sell shoes after she launched a pop-up in midtown Manhattan this spring.

The 53-year-old recently unveiled plans for a permanent brick-and-mortar location in New York, which is set to open in the South Street Seaport district of Manhattan in late summer.

Click through the gallery to see some of Sarah Jessica Parker’s most memorable shoe looks from over the years.

Happy Birthday, Sarah Jessica Parker: A Look at Her Shoe Style Through the Years