The Shoe Rule Everyone Is Following at the Royal Wedding 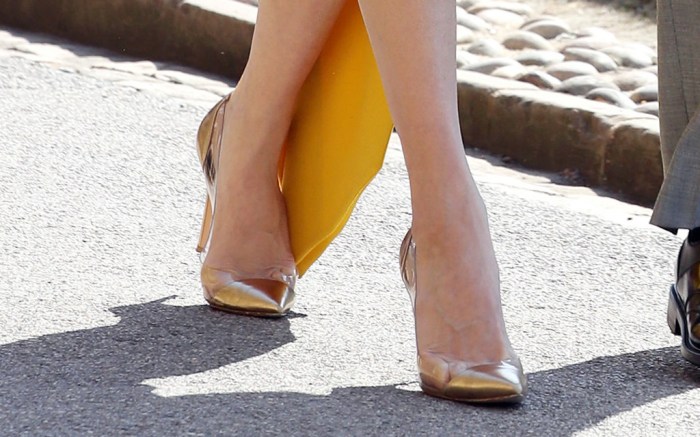 Sandal season is here at last — but at the royal wedding in Windsor, England today, there won’t be an open-toed shoe in sight.

Prince Harry and Meghan Markle’s official wedding dress code, as written on their invitations, only dictates that men should wear a “morning suit or lounge suit” and that women should wear a “day dress and a hat.”

But according to palace etiquette experts, guests are expected to wear closed-toed shoes. Women are also supposed to sport heels — but while kitten heels are acceptable, donning stilettos is frowned upon.

Guests are expected to sport stockings underneath their dresses — a royal dress code rule Markle herself has shirked on previous occasions, such as when she announced her engagement to Prince Harry this fall.

While some guests may have gone stocking free, it appeared that all attendees adhered to the dress code and opted to wear closed-toed shoes at today’s wedding.

Pippa Middleton, Oprah and Serena Williams opted for blush or nude pumps that were more traditional in nature. Amal Clooney added a more glamorous element to her ensemble, opting for metallic heels that popped against her canary yellow hat and heels.

Markle herself wore a floor-length Givenchy gown that hid satin heels also from the label. Meanwhile, Prince Harry wore military regalia, sporting a similar ensemble to the one his older brother, Prince William, donned at his own 2011 wedding to Kate Middleton.

Click through the gallery to see all of the famous royal wedding guests, including David and Victoria Beckham, Oprah and more.