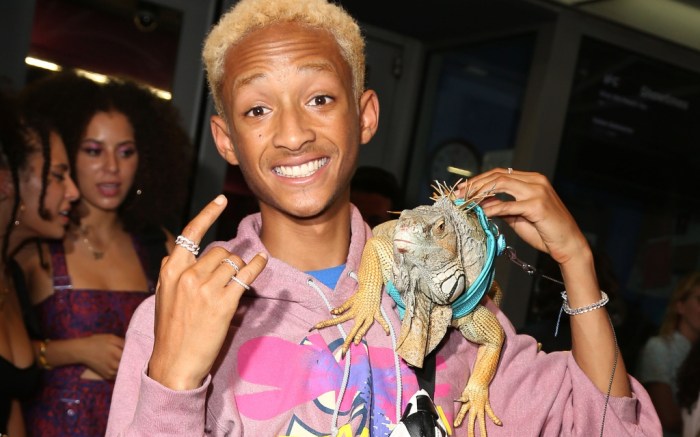 Jaden Smith likes to push the bounds with his style, whether he’s on the red carpet or in the streets.

The rapper loves his Louis Vuitton Archlight women’s sneakers, but it’s often his accessories, not his footwear, that really make his outfits pop.

Just this week, the actor added a crazy accessory to his look: an artillery-inspired bag with flame detailing and a check pattern. Aside from the bag, which was strapped across his chest, Smith’s red T-shirt, jeans and New Balance x Louis Vuitton sneakers were standard fare.

Even at the Met Gala — where the themes encourage celebrities to experiment with daring outfits — Smith has managed to make headlines with his style.

At the 2017 Met Gala, the star stepped out in a relatively plain all-black outfit, but he stood out with a very unusual accessory: a cut-off ponytail featuring his own hair.

And at the 2018 Met Gala, Smith continued his tradition of zany accessories by carrying the gold certification for his album. While the chains around his neck may have weighed him down some, remembering to pick up the certification each time he moved along the step-and-repeat probably brought its own set of challenges.

But perhaps the 20-year-old’s boldest accessory came at the premiere of “Skate Kitchen” in June. There, the star carried around a live iguana, which he held on a leash.

Click through the gallery to see more of Jaden Smith’s craziest accessories, both on and off the red carpet.