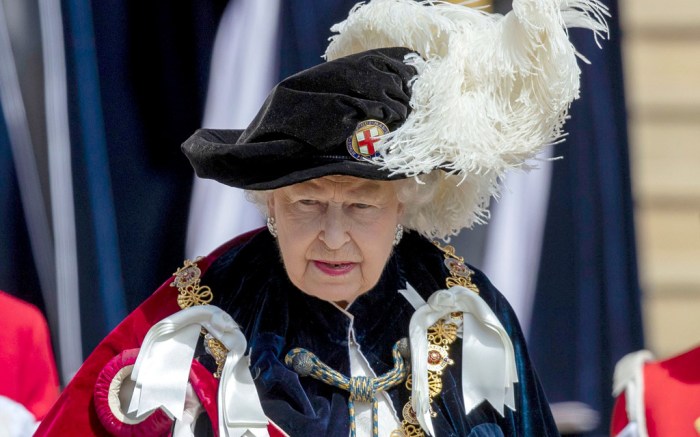 Days after making a style statement in a bright lime green suit for her first solo outing alongside Megan Markle, Queen Elizabeth II donned her ceremonial dress for Garter Day, a celebration in honor of the Order of the Garter Monday morning at St. George’s Chapel at Windsor Castle.

Completing the Queen’s head-turning outfit for the occasion — which honors the “oldest and most senior Order of Chivalry in Britain,” according to the royal family’s website — was a pair of silver metallic T-strap pumps boasting a block heel and a semi-pointed toe poking out from underneath her white dress.

The 92-year-old matriarch who serves as head of the Order of the Garter also accessorized her long dress featuring a navy velvet cloak over top and a red velvet sash with diamond flower-shaped earrings.

Prince William was also on hand as a Knight Companion, which he was appointed to in 2008. The father of three was seen walking beside his dad, Prince Charles, in the march to St. George’s Chapel today. However, Kate Middleton, Meghan Markle, and Prince Harry were nowhere to be seen.

Scroll through the gallery for a look at Queen Elizabeth’s shoe style during the ’60s.

The Queen Shines Bright During Big Day of Engagements