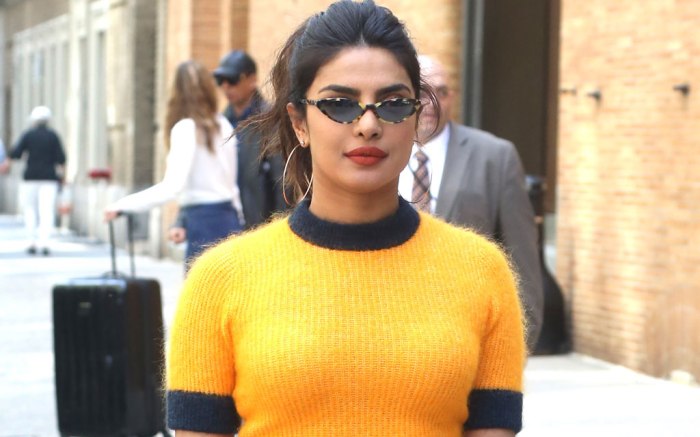 Priyanka Chopra upped her street-style game in 2018 — looking stylish in everything from form-fitting minidresses to jeans and T-shirts.

The 36-year-old began her stylish run before she started dating husband Nick Jonas. On a May 2 pre-Jonas outing in New York, Chopra was chic in a fuzzy yellow Ganni shirt, Frame trousers and Fendi pumps. She accessorized with sunglasses from Gigi Hadid x Vogue Eyewear — a fitting choice given that she and Hadid are both styled by Mimi Cuttrell.

Chopra also has airport style figured out. While departing from JFK Airport with Jonas in July, the “Quantico” actress wore a blush-colored Alexander Wang top with wide-legged pants in the same shade. She draped a white jacket over her shoulders and chose open-toed Kurt Geiger mules to add a sophisticated finish to her dressed-down look.

After returning to New York in December for the first time since marrying Jonas, Chopra went for a walk with her dog while wearing a simple but chic outfit.

Rather than opt for an all-black ensemble, the star went with winter whites. She stunned in a furry green jacket worn over a white bodysuit and white jeans. She finished off her look with white Stuart Weitzman boots, proving that the white shoe trend is still going strong.

Click through the gallery to see more of Priyanka Chopra’s best street-style looks in 2018.

Only Priyanka Chopra & Sophie Turner Can Look This Good Hungover