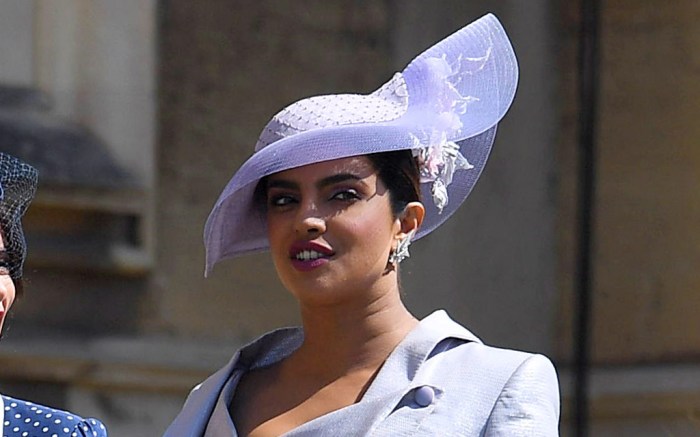 The 35-year-old “Quantico” actress completed her look with one of the biggest shoe trends of spring ’18: clear shoes. She chose Off-White x Jimmy Choo pumps that featured crystal embellishment along the ankle.

Although etiquette rules at the royal wedding dictate that guests ought to wear closed-toed shoes, Chopra pushed the boundaries of that rule with her footwear. While the “Baywatch” star’s toes were tucked inside her pumps, they were visible through the shoes’ clear upper.

As one of Markle’s best friends, Chopra was an obvious invitee, with some even speculating that Markle could break with royal tradition and choose her as a bridesmaid (British royals typically have bridal parties made up of all children).

While Chopra was not a member of Markle’s bridal party, she certainly looked chic for her friend’s big day.

Click through the gallery to see more stylish guests at the royal wedding, including George and Amal Clooney, Serena Williams and Alexis Ohanian and David and Victoria Beckham.

The Shoe Rule Everyone Is Following at the Royal Wedding