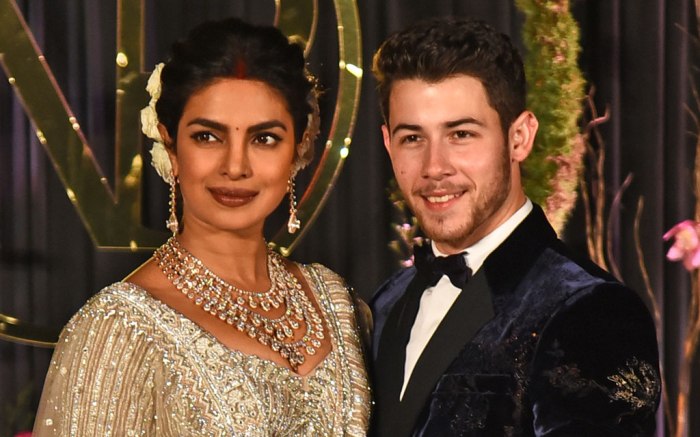 Priyanka Chopra glistened in a sparkly look at her wedding reception in New Delhi alongside new husband Nick Jonas today.

Chopra’s over-the-top look was an off-white lehenga, which was covered in beading and embroidery. While the actress’ footwear remained hidden underneath the dramatic skirt, she was decked out in jewelry, including a series of bangles, dangly earrings and a massive necklace. The “Quantico” star added a sweet element to her look with flowers in her hair.

Meanwhile, Jonas was dapper in a velvety navy blue tuxedo by Musika Frère, worn with a white collared shirt underneath and basic black shoes. The pop star’s understated ensemble was the perfect complement to his wife’s dramatic look as they posed for pictures together at their reception venue.

Also on hand for photos was Joe Jonas, one of Nick’s two older brothers, his former Jonas Brothers bandmates. Joe coupled up with fiancée Sophie Turner.

Like his brother, Joe chose a navy outfit for the reception. The DNCE frontman opted for a dark blue suit with a black T-shirt underneath, finishing off his more casual look with a pair of shiny dress shoes and mussed hair.

Standing by his side, Turner looked stylish in a blush-colored traditional Indian ensemble, which featured shiny gold detailing. The “Game of Thrones” actress wore her blond locks down, topping off her look with a glimmering headpiece and matching necklace.

Click through the gallery to see more photos of Nick Jonas and Priyanka Chopra’s couple’s style.