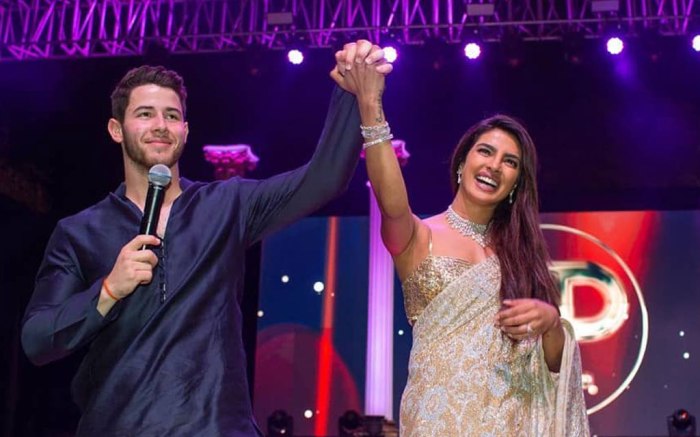 Clad in traditional Indian garb, Priyanka Chopra and Nick Jonas kicked off their wedding festivities Friday night with the Sangeet.

The duo took to social media on Sunday to share snaps from inside the celebration, a traditional part of a Hindu wedding. Held a day or two prior to the ceremony, the Sangeet is a musical evening, an over-the-top party that shows the two sides of the family competing in a musical battle.

For the occasion, Chopra was clad in a gold and silver dress and dripping in jewels, with a series of bangles around her wrist and a heavy choker on her neck. The bride’s elegant sari was designed by Abu Jani Sandeep Khosla and covered in hand-embroidered sequins. Jonas was also clad in a look by the designer, wearing a navy blue sherwani with silk thread detailing.

As he stepped onstage alongside his family, Jonas was in good company music-wise. The “Jealous” singer reunited with elder brothers Joe and Kevin, who he used to perform with as the Jonas Brothers. His younger brother, Frankie, performed with his siblings as well.

Sharing images of the Sangeet on Instagram, Chopra explained what the night meant to her and her new husband.

“Nick and I were looking forward to the Sangeet … and what a performance it was. Each family telling our stories through song and dance, filled with lots of laughter and love,” she wrote. “We were both filled with gratitude for the effort, the love and the laughter and will carry the memories of this special evening for the rest of our lives.”

Click through the gallery to check out Nick Jonas and Priyanka Chopra’s wedding style.