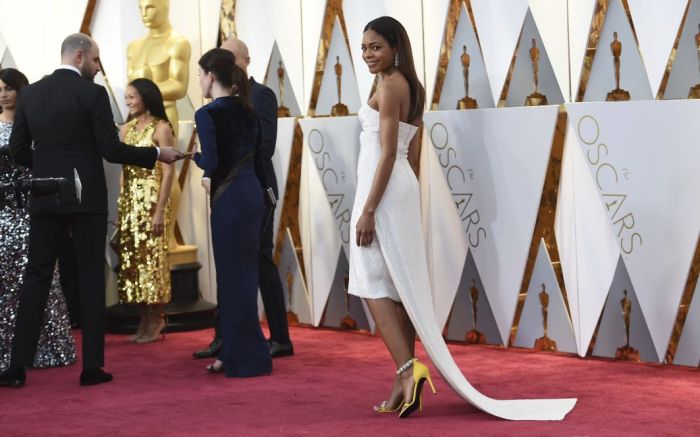 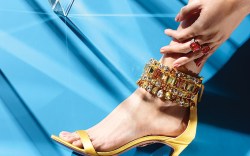 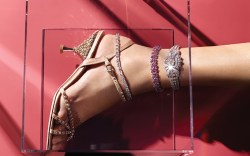 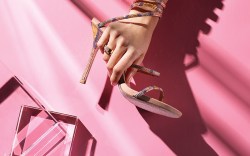 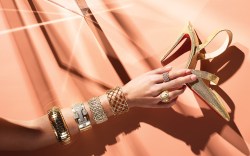 Today, as red carpet stylists scramble in the usual pandemonium that precedes an awards show, finalizing the last touches — and in some cases, making a last minute dress switch — there are plenty of decisions to consider, but shoes are very often the last call.

The gown is the biggest decision, followed by the jewels (both of which are often negotiated for hefty fees by big fashion and jewelry houses). Shoes, along with bags, can be considered neutralizers to dresses and jewels, and the biggest concern usually has to do with lengthening one’s leg (hence the nude heels trend and the popularity of styles like Stuart Weitzman’s Nudist sandal).

But there is one shoe trend that could bring more attention down to the red carpet (literally). Shoes with jewel-like accents have been popping up in designer collections for this spring and pre-fall, and there was even more bling at fall ’18 presentations during fashion month.

At Aquazzura, colorful crystals and satin paired with black feathers, while at Roger Vivier, designer Bruno Frisoni debuted a series of black velvet sandals with plenty of crystals that resembled baguette diamonds. And Giuseppe Zanotti continuted to prove he was the king of bling sandals, with lots of crystal embellishments, but there were also plenty of more demure options in black and red velvet that only had crystal detailing on the heel — an easy entry for actresses looking for more subtlety.

Shoes with bejeweled accents are nothing new, of course. Throughout the 19th and 20th centuries, diamond and colored stone “clips” were multi-purpose jewels that women could wear as brooches, earrings and as shoe clips, adorning basic satin pumps. Stuart Weitzman has taken a cue from the past, offering crystal shoe clips that can slip on and off satin flats and heels.

Some actresses have given the trend a try. At last year’s Academy Awards, Naomie Harris wore a pair of Calvin Klein’s satin and crystal sandals (with alternating toe and ankle straps), which she paired with a shorter white cocktail dress with a train (also by Calvin Klein), which allowed the shoes to be on full display.

And last fall at the HBO Emmy Award after-party, Jaime King rocked a pair of crystal embellished Giuseppe Zanotti sandals that were equally as bold as the sequin Oscar de la Renta strapless dress (which she also paired with a massive diamond ear cuff).

Embellished evening shoes also don’t have to be a high heel, as more designers are offering bejeweled flats and kitten heels that are just as chic (and maybe even more so) than their towering counterparts. Last year, Gal Gadot proved that evening gowns can be worn with a flatter, more comfortable evening shoe, and designers have taken note.