See How Oscar Nominee Mary J. Blige’s Matches Shoes to Her Dress In the Chicest Way 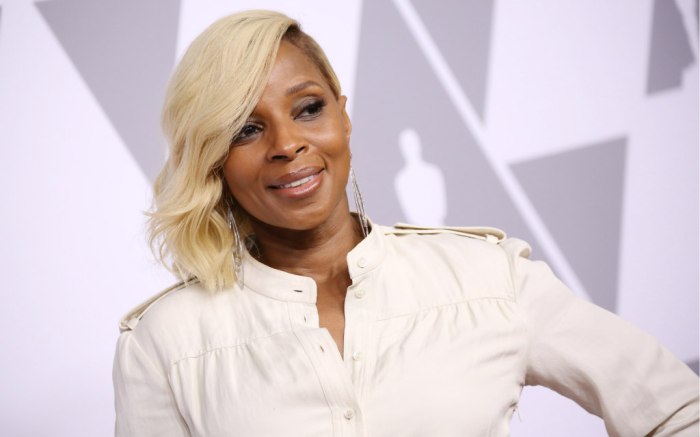 The R&B singer has already conquered the music world, cranking out 13 studio albums — eight of which have gone multi-platinum — and racking up nine Grammy Awards. Now, she’s solidified her status as a Hollywood heavyweight with her transformative performance as matriarch Florence Jackson in the critically acclaimed Netflix original film “Mudbound.”

Blige also put her music talents to work for the movie, writing a stirring song, “Mighty River,” for the soundtrack. At this Sunday’s Oscars ceremony, she will make history as the first person to vie for both a Best Supporting Actress and Best Original Song award in the same year.

As Blige’s career has evolved, so has her red-carpet style. In the 1990s, she helped pioneer the “ghetto-fabulous” trend that swept the fashion world, from the streetwear scene to the runways of luxury labels such as Gucci and Louis Vuitton. “That was something that I was happy about because it’s all I had in identity,” Blige said in a “CBS Sunday Morning” interview about being labeled ghetto fabulous and how it shaped her career early on. “I didn’t know who I was. So if ghetto fabulous and keeping it real and all of that was what I was, I was cool with that — until I learned that I can be more than that.”

Indeed, these days, the 47-year-old has certainly transcended her past, embracing a more sophisticated, understated fashion aesthetic — while still bringing a hint of her signature street-style flare. When it comes to accessories, the “Be Without You” singer loves a good statement shoe, whether it’s vampy platform Mary Janes or a fierce pair of patent leather slouch boots.

Blige is well known for her monochromatic looks, perfectly matching her shoes to her outfit. She’s one of the few celebs who can pull off an all-white ensemble, no matter the season. Case in point: At the annual Academy Awards Nominee Luncheon last month, she looked perfectly chic in a white Tom Ford corset-waisted dress, paired with Le Silla stiletto boots.

See more of Blige’s daring red carpet moments from over the years.