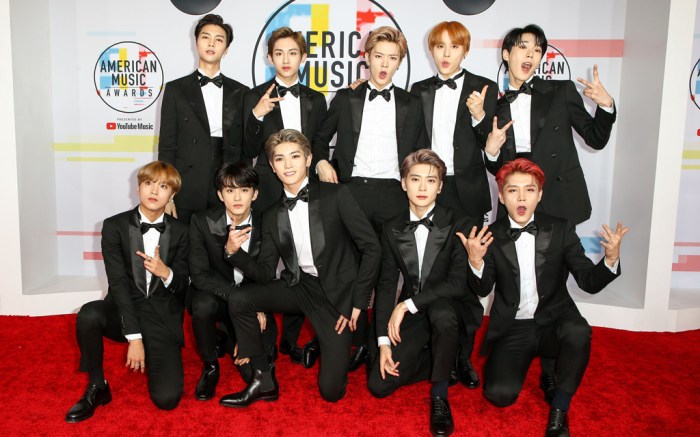 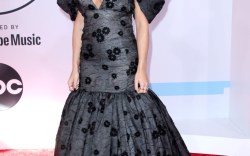 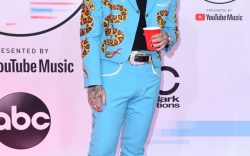 Amid a sea of bold, nontraditional red carpet looks at the American Music Awards, there were 10 guys decked out in traditional tuxedos.

Those 10 were the members of NCT 127, a K-pop band that made its first red carpet appearance at the AMAs tonight in Los Angeles.

Taeil, Johnny, Taeyong, Yuta, Doyoung, Jaehyun, Winwin, Jungwoo, Mark and Haechan put up a united front for the appearance. Each NCT 127 member sported a black tuxedo with shiny black dress shoes and a black bow tie — but their looks weren’t boring. Where the boys expressed some individuality with their looks was with their hair colors, with several members sporting dyed red or blond locks.

During NCT 127’s trip to L.A., the group also made their first appearance on a U.S. live television program, performing on “Jimmy Kimmel Live!” Monday night. On the show, the boys matched red velvet suits and black boots as they performed their song “Regular.”

At the AMAs, the NCT 127 members had the chance to meet a slew of American stars, including “America’s Next Top Model” host Tyra Banks. The 44-year-old posted a series of photos with the group to her Twitter account, writing: “Made some fierce new friends tonight who have already mastered the power of the smize!”

Made some fierce new friends tonight who have already mastered the power of the smize! @NCTsmtown_127 #AMAs⁠ ⁠ pic.twitter.com/rx0G2Wd8Hl

Click through the gallery to see more stars at the 2018 American Music Awards.

Ashlee Simpson & More Celebs Embrace Leggy Looks That Show Off Their Heels on the AMAs Red Carpet
Best-Dressed Celebs at the 2018 American Music Awards
Post Malone Stomps Out in Glittery Boots — and the Craziest Accessory, Plus More Stylish Men at the AMAs