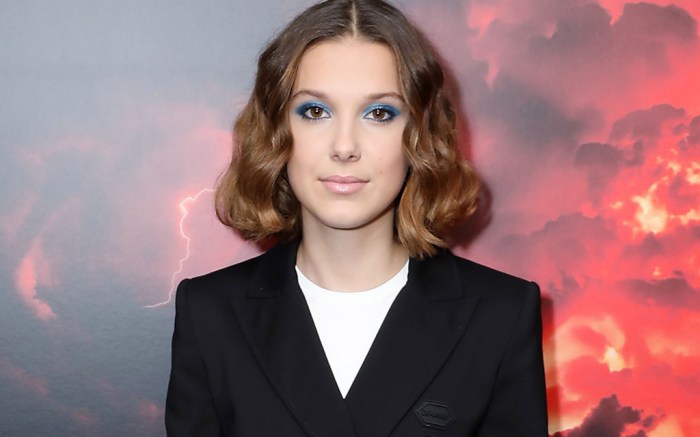 Millie Bobby Brown is all grown up.

At least that’s the statement she’s giving off at her latest public outing, where the 14-year-old talent addressed an audience at a Q&A event for the next season of her hit Netflix show, “Stranger Things.”

For the occasion, the young actress offered her take on the menswear-inspired suit trend, opting for chic blazer by Off-White with broad lapels and a length that cut right at the thigh. She kept the same colorway for footwear, posing in a pair of pretty sandals strapped at the ankle with decorative details on the shoe’s upper band.

Appropriately enough, Brown told the audience at the event that season 3 of “Stranger Things” is “definitely going to get darker.” Hosted by MTV journalist Josh Horowitz, the Q&A also invited questions about what to expect from the actress’ character, Eleven.

“I think Eleven should sacrifice herself in some way,” Brown shared. “If Eleven loses her powers, is she as powerful just as a character? I think that would be very cool. I want to build her to be a strong person without her powers.”

The British beauty has made a number of fashionable appearances as of late, including a similarly all-black ensemble at the 2018 MTV Video Music Awards, where she wore Rosie Assouline with chunky-heel PVC shoes by Christian Louboutin.

Click through the gallery to see more of Millie Bobby Brown’s best looks.