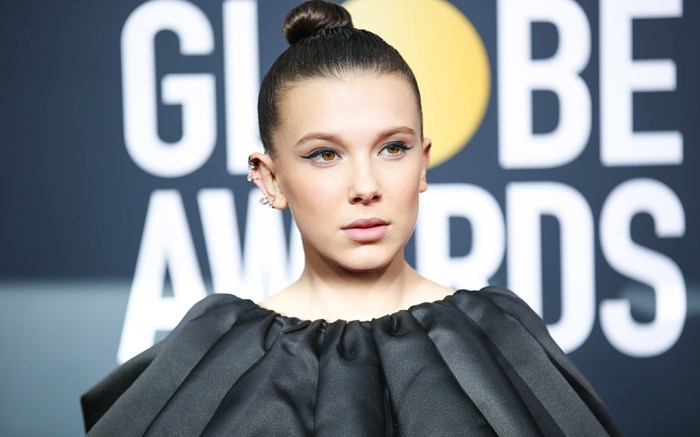 After debuting in summer 2016, Netflix’s “Stranger Things” quickly became a cultural phenomenon. And besides introducing the world to a talented cast of young actors, the show provided a platform for Millie Bobby Brown to become a style star.

At just 13 years old, Brown has already made a name for herself in the fashion industry. She earned a high-profile spot as the face of the Calvin Klein by Appointment collection and has starred in several Converse commercials.

So it’s only fitting that Brown frequently sports the label on the red carpet. At the Golden Globes this month, Brown stepped out in a chic double-silk satin minidress. She completed her ensemble with trendy mismatched Calvin Klein sandals, making shoes the centerpiece of her outfit.

While this year’s Golden Globes called for an all-black dress code, Brown has been known to hit the red carpet in more colorful ensembles. At this year’s Teen Choice Awards, she selected a frilly yellow Kenzo dress, which she paired with block-heeled Pierre Hardy sandals.

The teen also steps out in white quite often. She donned an age-appropriate tulle dress in the shade at the Emmy Awards this fall, accessorizing with colorful heels at the event, where she was nominated as Best Supporting Actress in a Drama Series for her work on “Stranger Things.”

And one of Brown’s most statement-making looks was the monochrome all-white ensemble she sported at the 2017 MTV Movie & TV Awards. Brown selected a sequined long-sleeved frock at the awards show, which she paired with cowboy boots for a memorable ensemble that cemented her status as a rising style star.