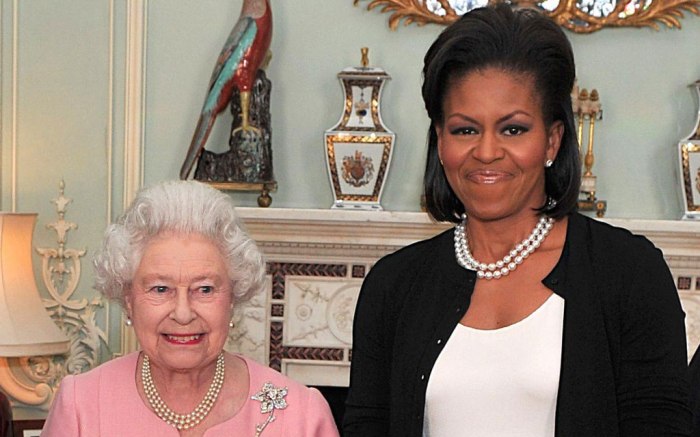 Touching the British royal family is a major no-no. But when Michelle Obama met with Queen Elizabeth II in 2009, she gave the monarch a hug.

In her new book, “Becoming,” Obama revealed that the contact came during a conversation about the pain both women’s high heels were causing them.

Sporting a pair of Jimmy Choo high heels, the former first lady told the queen that her shoes added a few inches of height, prompting Queen Elizabeth II to gesture at her own heels and say, “These shoes are unpleasant, are they not?“

In response, Obama “confessed” that her own feet were also bothering her, joking that they were “just two tired ladies oppressed by our shoes.”

“I then did what’s instinctive to me any time I feel connected to a new person, which is to express my feelings outwardly. I laid a hand affectionately across her shoulder,” she wrote. “If I hadn’t done the proper thing at Buckingham Palace, I had at least done the human thing.”

The 54-year-old also chronicles the process by which she became a fashion icon.

Throughout the campaign, Obama worked with Meredith Koop to put together her looks, with Koop later coming onboard as a personal aide and stylist.

To avoid criticism on either end of the spectrum, Obama mixed up her looks, sporting pieces from high-end designers like Michael Kors and Diane von Furstenberg with bargain finds from Target and The Gap.

She particularly focused on wearing American designers — especially emerging ones.

“I wanted to draw attention to and celebrate American designers, especially those who were less established, even if it sometimes frustrated the old guard, including Oscar de la Renta, who was reportedly displeased that I wasn’t wearing his creations,” she wrote.

Click through the gallery to see Michelle Obama’s White House style over the years.