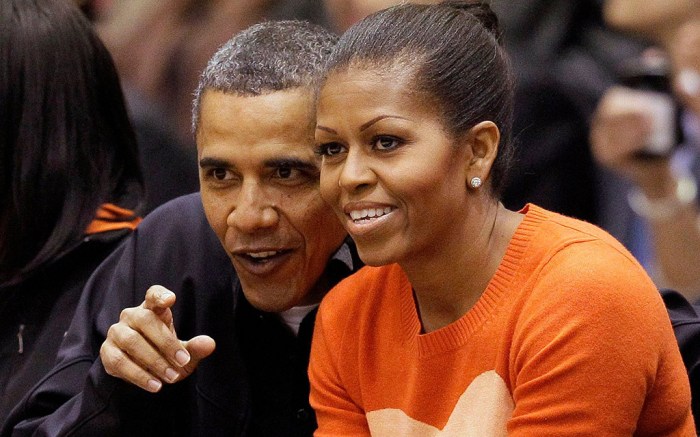 Because public figures are often under heavy scrutiny, it’s not surprising to learn that many of them make calculated wardrobe choices.

Take Michelle Obama, for instance, whose fashion as the first lady for eight years during the Obama administration was marked by a undeniably preppy and timeless sense of style.

And in a recent Instagram post, Meredith Koop, stylist to the former first lady, revealed that Obama’s decisions also send out a heartwarming message — that is, one that celebrates “LOVE COMPASSION [and] HEART,” as she wrote in a caption of a photo featuring Michelle and former President Barack Obama at a 2011 NCAA basketball game between the Oregon State Beavers and Towson Tigers.

Attending in support of brother Craig Robinson, who was then the team’s head coach, Michelle wore a classic pair of Converse All-Star sneakers in black along with an orange sweater featuring a graphic print of a heart smack in its middle.

“The writing’s on the wall y’all (and the fabric),” Koop added, along with the hashtags #humanity, #decency and #meaningfulfashion. She also tagged #immigrantrights and #keepfamiliestogether — a nod to the crisis dividing the White House, centered on the controversial separation of parents and children at the border.

The comment came the same day first lady Melania Trump drew confusion and concern for wearing a Zara jacket emblazoned with the words “I really don’t care. Do U?” upon arriving in McAllen, Texas, to meet with displaced migrant children who were separated from their families under Trump administration measures.