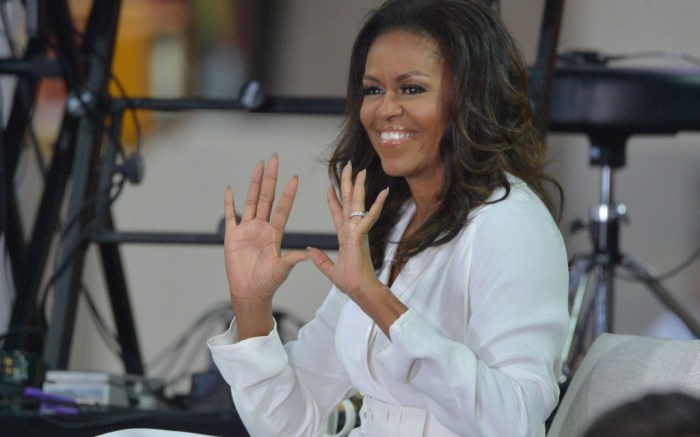 Michelle Obama stopped by the “Today” show concert series in NYC Thursday to talk politics and to announce the Obama Foundation’s new initiative, the Global Girls Alliance, an organization “seeking to empower adolescent girls around the world through education.”

The former U.S. first lady, who sat down with NBC’s Hoda Kotb and Savannah Guthrie, wore a sophisticated white look for the special appearance, styling a white belted dress that landed just below her knees with matching white-hot pumps.

When she was asked whether she would ever consider running for president, Obama quickly replied, “Absolutely not.” Continuing on the subject, she shared, “I have never wanted to be a politician. I want to serve, I want to be out there. There’s so many ways to make an impact. Politics just isn’t my thing.”

The mother of two was also joined by Karlie Kloss, Zendaya, Kelly Clarkson, Meghan Trainor and Freida Pinto during a celebration for the International Day of the Girl. The group was caught snapping selfies together with Kloss holding the camera.

Beyoncé and Jay-Z Perform in France Jerseys, and Michelle Obama Dances Along