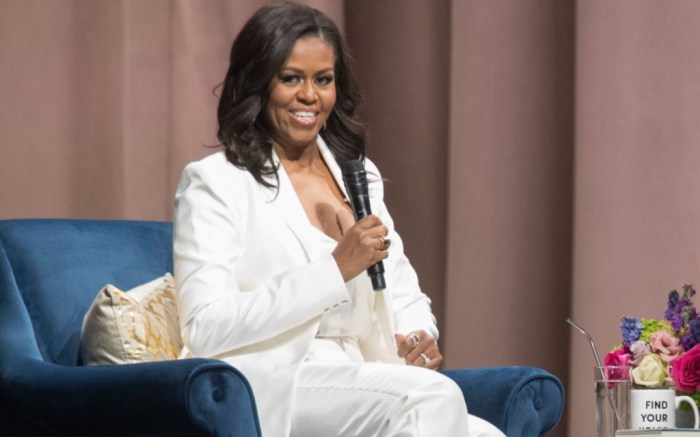 Michelle Obama continued her 10-city book tour across America with an appearance at Brooklyn’s Barclays Center Saturday night for an interview with her friend, poet Elizabeth Alexander. She chose a white-hot look for the stop.

The former first lady, whose new memoir “Becoming” has already broken records since its Nov. 14 release, dressed in a sleek white pantsuit paired with statement-making ankle booties of the same color.

The bold caged silhouette, dubbed the Sheldon, is courtesy of Jimmy Choo and is 40 percent off at bloomingdales.com. Originally retailing for $1,050, they can be purchased for just $630. The pointy-toed Italian-made leather booties featuring a 4-inch heel are also available in black.

During her sit down with Alexander, Obama spoke candidly about everything from marriage counseling with Barack to her favorite White House moments, such as the time Malia snuck out to see the rainbow lights on the day the Supreme Court passed marriage equality.

For more of Michelle Obama’s chic style, check out the gallery.