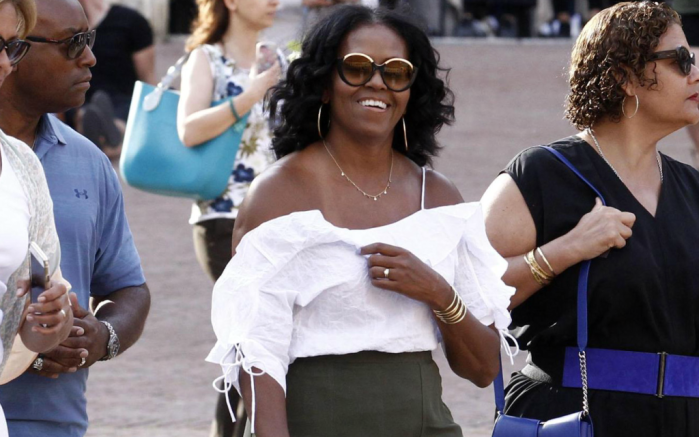 Michelle Obama turns 54 today. And to celebrate her birthday, we’ve taken a look at her style since leaving the White House. The former first lady, who is arguably one of the most beloved, had quite the year, from vacationing in Italy to appearing on stage at the ESPYs last summer.

The self-described “hugger-in-chief” made her first major appearance since leaving the White House at the 25th annual ESPY Awards in July, where she honored the late Eunice Kennedy Shriver with the Arthur Ashe Courage Award. For the occasion, the mom of two wore a black cut-out dress by Cushnie et Ochs and a pair of asymmetrical patent leather pumps from Gianvito Rossi.

Prior to her return to the limelight, the Chicago native was spotted living it up in Italy, where she stepped out in slides on numerous occasions.

More recently, the author and speaker was photographed on the beach in Miami with her oldest daughter, Malia, looking relaxed in a white bikini top, a collared button-down as a cover-up and white distressed cutoff shorts.

For a look at Michelle Obama’s White House style, check out the gallery.