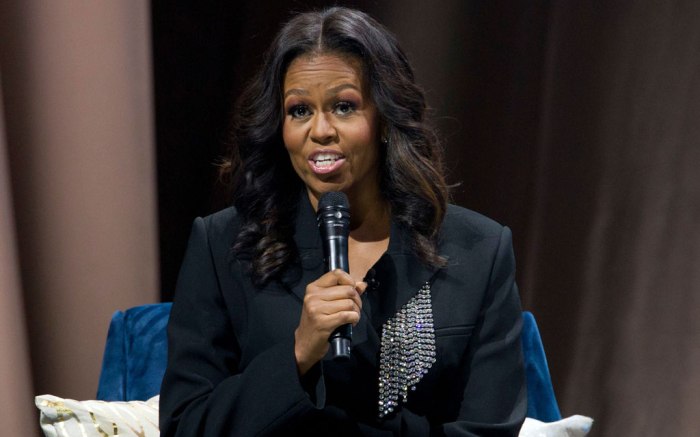 Michelle Obama got a surprise visit from a familiar face — former president Barack Obama — while promoting her book in Washington, D.C. yesterday.

The former first lady put a glamorous spin on pantsuit dressing as she stepped onstage, presenting her memoir, “Becoming,” to a full crowd. The 54-year-old wore a custom Christopher Kane look.

The stylish ensemble consisted of a fitted blazer with sparkly fringe detailing on the left lapel and a pair of fitted black trousers. For footwear, she selected classic black pumps that provided a chic finish to her look.

The Harvard Law School alumnae took to the stage alongside Valerie Jarrett, who served as a senior White House advisor while President Obama was in office.

Then, the former president made a surprise appearance. As conversation turned toward Michelle’s husband, Jarrett announced that a special guest was in the house.

Obama appeared with a bouquet of flowers in hand for his wife, sending the crowd into a frenzy. Like his wife, President Obama wore a suit. He opted for a black look, wearing a white button-down shirt underneath with no tie.

Before heading off-stage, the couple showed off their dance moves, dancing around to Stevie Wonder’s “Signed, Sealed, Delivered I’m Yours.”

Click through the gallery to see Michelle Obama’s best White House style over the years.