Met Gala’s Most Talked-About Looks From 2017 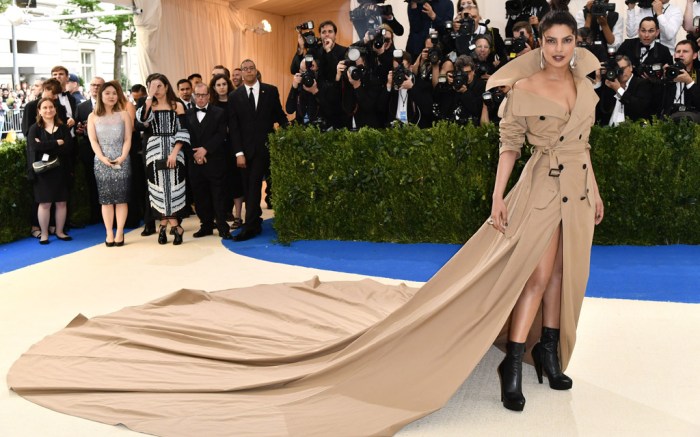 The 2018 Met Gala is just days away, which means celebrities, stylists and designers are busy prepping for the Metropolitan Museum of Art Costume Institute’s big night. As we wait for what’s been dubbed as the party of the year, here’s a look at the most talked-about red-carpet ensembles in 2017 from stars such as Kendall Jenner, Priyanka Chopra and more.

These are worth the flashback.

Kendall Jenner left little to the imagination when she walked the Met steps last year. The model donned a sheer draped gown by La Perla that incorporated 85,000 hand-painted and -placed crystals in dégradé shades with a sheer painted macramé bodysuit.

She paired the look with Christian Louboutin mesh pumps.

Céline Dion made quite the entrance at the 2017 Met Gala. The singer was last to walk the red carpet, and she put on a show by bursting into song as she posed for photographs. Dion wore a Versace look for the occasion, which marked her first time at the annual event.

Pharrell Williams and wife Helen Lasichanh were showstoppers last year. Well, it was mainly Lasichanh who made a statement. She took the 2017 theme, which was “Rei Kawakubo/Comme des Garçons: Art of the In-Between,” literally and wore a Comme des Garçons avante-garde jumpsuit.

Rihanna also welcomed the theme of the night in an architectural Comme des Garçons dress that came straight from the 2016 runway.

Solange knowles had mixed reviews of this Thom Browne ensemble. Wearing what looked to be ice-skates as shoes, Beyoncé’s younger sister opted for an extreme puffer jacket look that was compared to a sleeping bag.

Bella Hadid debuted a short bob at the 2017 Met Gala and showed off a skintight jumpsuit by Alexander Wang. The model wowed in the backless see-through outfit.

Priyanka Chopra had one of the best trains of the night. The “Quantico” actress wore an exaggerated trench coat-inspired dress by Ralph Lauren.

Click through the gallery to see all the red carpet looks from the 2017 Met Gala.