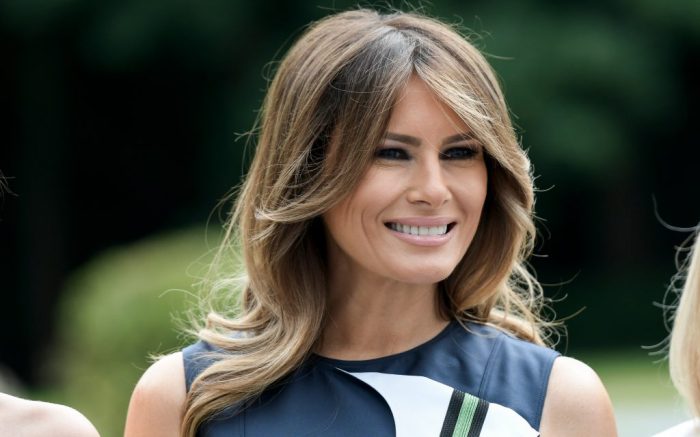 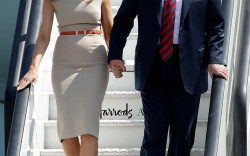 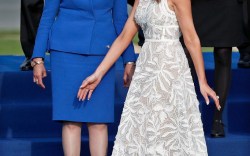 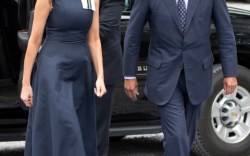 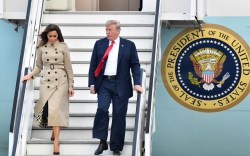 While Melania Trump’s outfit choices wildly vary from over-the-top formal to (sometimes controversial) casual, there’s one accessory that she’s been steadfastly loyal to since Inauguration Day: her Christian Louboutin pumps. And more photos have emerged to further back that up. It’s been less than a week into her European tour (which in addition to Belgium and London will also include stops in Scotland and Finland), and the first lady has worn her beloved red-sole shoes a whopping total of six times.

She kicked off her Louboutin streak on the day of her departure: July 10. She was snapped in a fairly minimalist look featuring a red Ralph Lauren sweater and a beige A-line Martin Grant midiskirt, but she added a dose of playfulness with a pair of patterned Louboutin So Kate pumps — a marked departure compared with her usual assortment of solid-colored shoes. Priced at $795, the shoes are made from clear PVC that reveal a collage of Loubi Kraft pattern consisting of red, tan and white paper — a look that that resembles the house’s shoeboxes.

When she touched down in Belgium for the two-day NATO summit, she made an outfit change, swapping her sweater-and-skirt set for a Burberry trench, her collaged So Kate pumps for simple black Louboutins.

The next day, the first lady arrived at the Queen Elisabeth Music Chapel in Waterloo, Belgium, in a navy sleeveless Calvin Klein dress, complementing the striped white accent panel with a pair of stark white Louboutins.

Later that day, she kept the focus on her dress — an embellished white see-through Elie Saab number — by wearing nude Louboutin pumps.

For her first look in London, she went for a pared-back monochromatic look: a taupe form-fitting Roland Mouret dress that she coordinated with Louboutins in the same shade.

And finally, to cap off the week, she went bowling in a multicolored striped dress and nude Louboutins.

Click through to see all her looks from the European tour.