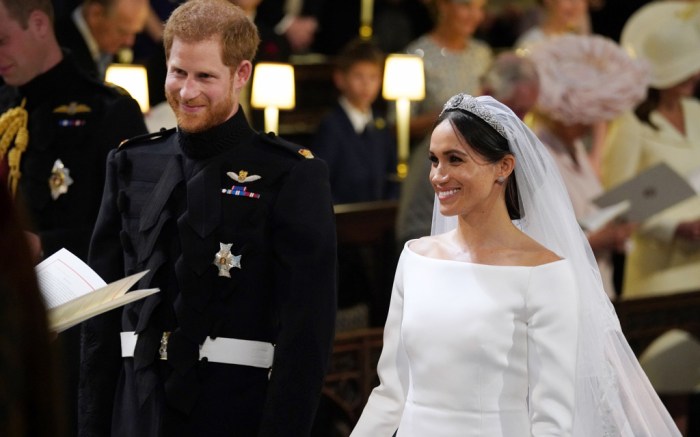 Meghan Markle looks very much the part of a princess as she marries Prince Harry in Windsor, England today.

According to the official royal website, “the focus of the dress is the graphic open bateau neckline that gracefully frames the shoulders and emphasises the slender sculpted waist. The lines of the dress extend towards the back where the train flows in soft round folds cushioned by an underskirt in triple silk organza. The slim three-quarter sleeves add a note of refined modernity.”

Her wedding footwear is Givenchy as well, based on a refined pointed couture design and made of a silk duchess satin.

Although Markle’s tiara was rumored to be one of Princess Diana’s, she is instead wearing a piece of Princess Mary’s, which was made in 1932.

Before the wedding, several designers were rumored as the brain behind Markle’s ensemble, including Ralph & Russo and Stella McCartney. But Givenchy, a French label instead of British as rumored, is a perfect choice for the former actress because of its classic designs and beautiful silhouettes.

Following her engagement to Prince Harry in November, Markle has developed a reputation as a style influencer. Fans covet her chic, classic wardrobe, and brands she has worn have seen increased web traffic and sales.

Kate Middleton’s 2011 wedding dress spawned knockoffs and inspired other brides to wear similar ensembles to their own weddings, both within and beyond the United Kingdom.

Markle’s stylish look likely will inspire brides — and wedding gown designers — in months to come. And Givenchy could see increased sales because of women hoping to get Markle’s style.

Click through the gallery to see all of the guests at Prince Harry and Meghan Markle’s wedding.