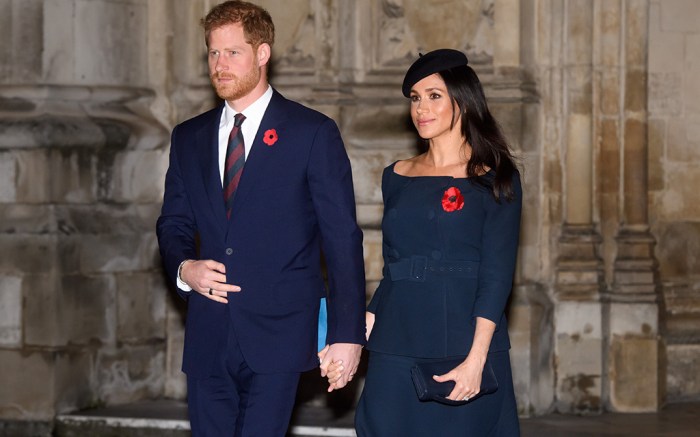 Meghan Markle made her second appearance today in honor of the Centenary of the Armistice. The Duchess of Sussex joined husband Prince Harry, Prince William and Kate Middleton along with Queen Elizabeth II for a special service at Westminster Abbey in London.

This evening’s event was marked the finale of commemorations for the 100-year anniversary of the armistice that brought an end to World War I.

After Markle was seen in a black button coat earlier in day at the Cenotaph war memorial, the pregnant royal changed into a different look for the Westminster Abbey engagement. She donned a navy peplum ensemble featuring a button and belted top with a matching skirt along with her go-to Aquazzura Deneuve bow pumps.

For Middleton’s second look of the day, she chose a forest green dress coat with velvet accents and black bespoke velvet heels by Jimmy Choo.

To see more of Meghan Markle’s statement-making maternity style, click through the gallery.