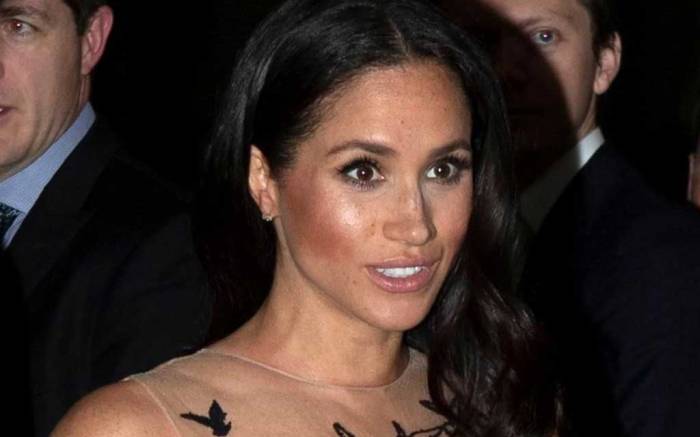 Having closed their two-day visit to Tonga and bid farewell to the islanders, Meghan Markle and Prince Harry returned to Sydney on Friday and attended the Australian Geographic Society Gala Awards. However, while the event may not have constituted a ball, the duchess pulled out all stops with a fairytale gown.

The dress, by Fernando Garcia and Laura Kim of American label Oscar de la Renta, hails from pre-fall ’18. It featured graphic avian-motif black appliqué over a nude corset, so it seemed as if birds had taken flight across her décolleté. The embellishment continued degradé style over a frothy tulle skirt.

This was an ultimate fairytale frock, but unlike the more traditional Cinderella style McQueen worn by Kate Middleton on Tuesday at Buckingham Palace, Markle’s was a thoroughly modern, darker and infinitely edgier take. Think a Cinderella remake directed by Alfred Hitchcock, and you’ve got the picture.

The Aquazurra Deneuve pumps with their bow detail at the heel, which have made at least two appearances to date on the royal tour, made for a perfect match.

During the ceremony, the queen of England was presented with a special environmental award, which Prince Harry accepted on her behalf.

Earlier today in Tonga for the unveiling of The Queen’s Commonwealth Canopy at Tupou College, the Duchess of Sussex wore a shirtdress by Veronica Beard, which she teamed with a pair of U.S. high-street label Banana Republic’s 12 Hour Madison pumps in pale gray.

She changed into a white and green striped Martin Grant dress when the couple was presented with flower garlands at the Fa’onelua Convention Centre ahead of their farewell to the island. The dress featured long sleeves and olive green stripes. Markle teamed it with suede heels in the same shade.