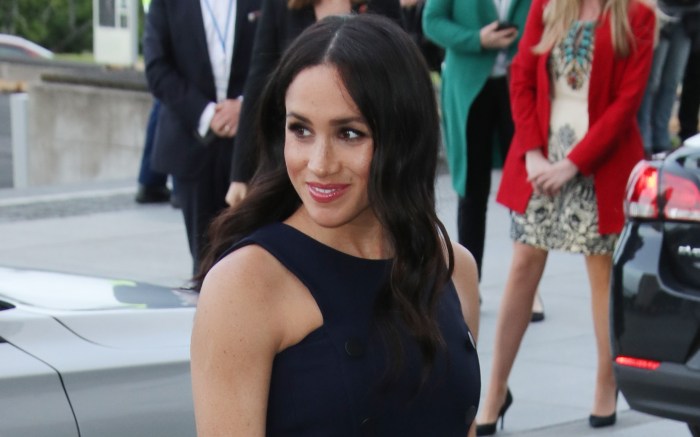 On Tuesday evening in Auckland, New Zealand, Meghan Markle attended a reception hosted by Prime Minister Jacinda Ardern at the city’s War Memorial Museum. And for the occasion, the Duchess of Sussex wore a navy evening dress with an asymmetric hem by Antonio Berardi — a design she had previously worn in 2017 at a polo match.

But unlike her more casual 2017 look (which she grounded with a white blazer layered on top), this time, she dressed it up with a simple black clutch and a pair of Aquazzura’s Deneuve pumps in beige suede. We know the duchess is a major fan of this style; she has worn the black version on numerous occasions during the royal tour.

Earlier on Tuesday, the Duke and Duchess of Sussex paid a visit to a charity called Pillars alongside Ardern. Pillars supports children who have a parent in prison. In lieu of a wedding gift to the royal couple, the New Zealand government donated $5,000 to the charity.

The duchess wore a similar dress by the same designer in yellow to attend a Commonwealth Youth project in July. Markle also chose an olive-colored shirtdress by the designer earlier during the royal tour of Australia for a reception in Sydney hosted by the governor-general and his wife.

Later, the royal couple went on a walkabout to meet well-wishers at Auckland’s Viaduct Harbour.

Click through the gallery to see more of Meghan Markle’s fashionable moments during her royal tour.

Every Shoe Meghan Markle Has Worn on Her Australian Tour