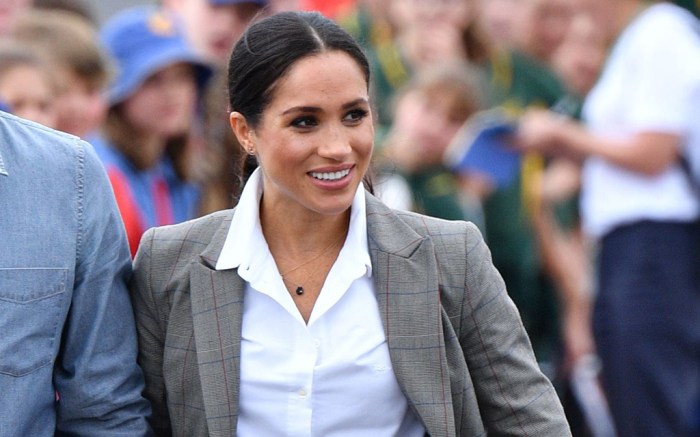 It’s good to have friends like Meghan Markle. Just ask Serena Williams, who got a boost of worldwide attention off the tennis court when the Duchess of Sussex wore a jacket from the Nike athlete’s namesake collection when she arrived at Australia’s Dubbo Airport on Wednesday (15 hours ahead of eastern standard time). Williams was a guest at her wedding on May 19.

The former actress and Prince Harry were greeted by children upon their arrival — good thing she dressed in a practical outfit when she stepped onto a grassy field.

Markle had on the gray and plaid “Boss” blazer from the Serena Williams Collection ($145) teamed with black Outland Denim jeans, a white Maison Kitsune top and J. Crew’s black Sadie ankle boots in suede on a 2.5-inch heel. The boots retail for $178 on Jcrew.com.

The couple took a tour of the Royal Flying Doctor Service at Dubbo Airport and will visit drought-affected communities in New South Wales.

On Tuesday, Markle demonstrated her sensible attitude toward dressing when she swapped out her nude heels for a pair of black flats during an appearance in Sydney, the first stop of her royal tour of Australia.

Click through to see all of Meghan Markle’s maternity style, thus far.