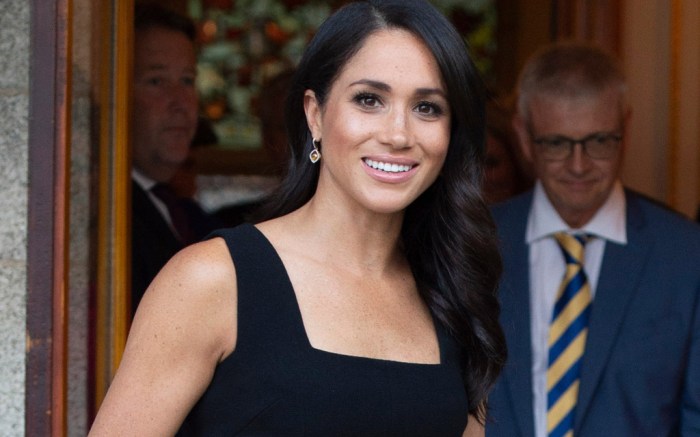 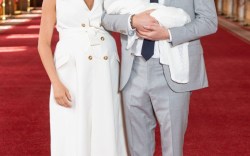 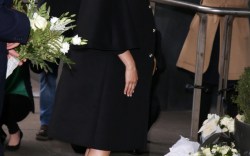 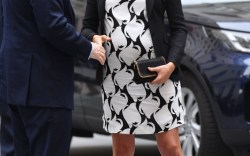 With three royal engagements in a single day, it’s no wonder Meghan Markle has made an equal amount of outfit swaps. (And that’s not even counting her monochromatic look at Prince Louis’ christening.)

The Duchess of Sussex’s latest sartorial statement happened during a reception at Glencairn, the residence of British ambassador Robin Barnett, where she stepped out with Prince Harry in a belted black dress by Emilia Wickstead and stylish shoes from one of her favorite designers, Aquazzura.

The new royal opted for the brand’s signature Deneuve pumps in black, which featured a pointed toe, side cutouts, a super-slim stiletto and a flirty pert bow affixed to the back. (She also wore the same heels two weeks ago at Queen Elizabeth’s Young Leaders Awards at Buckingham Palace in London — and another pair by the brand more memorably during her engagement announcement.)

Markle kept her accessories in the same color family with a simple black clutch and wore her hair down — a contrast from the prim and proper chignon she wore earlier at the 100th anniversary celebration for Britain’s Royal Air Force and upon touching down at Dublin Airport.

She is also making headlines for her choice of Emilia Wickstead, who reportedly claimed that the duchess’ wedding gown — a couture piece created by Givenchy’s artistic director, Clare Waight Keller — bore some resemblance to one of Wickstead’s own designs.

Wickstead addressed the commentary in an Instagram post: “Her Royal Highness, the Duchess of Sussex looked absolutely beautiful on her wedding day and I have the utmost admiration and respect for her. I do not think that her wedding dress was a copy of any of our designs. I have the greatest respect for Clare Waight Keller and the House of Givenchy — a huge source of inspiration to me.”

The duchess and her husband are expected to continue their two-day visit in the city with a tour of the Irish Immigration Museum and a trip to Trinity College, among other plans in their royal itinerary.

See some of Meghan Markle’s most stylish shoe moments.