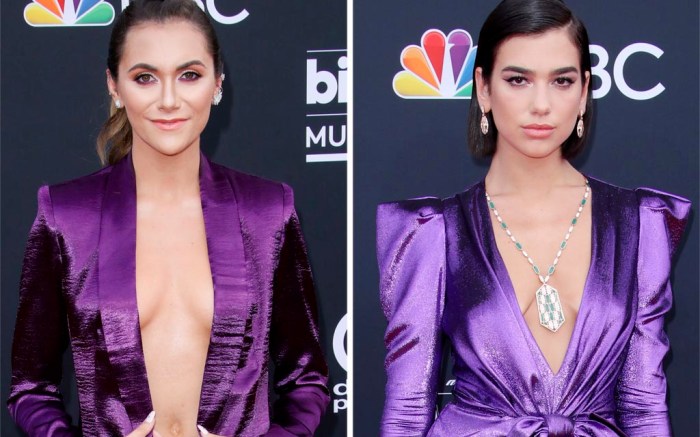 The 2018 Billboard Music Awards red carpet saw many statement styles and beauty looks today, but there was also a number of celebs that made us do double-takes with their strikingly similar ensembles.

Enter Bebe Rexha, whose black velvet gown with extravagant tulle sleeves had us wondering whether she and Tyra Banks, who went with a knee-length ruffle sleeve dress, planned their getups before arriving at the awards show at the MGM Grand Garden Arena in Las Vegas.

The “I Got You” singer wore peep-toe platform stilettos by Brian Atwood with a gown from Christian Siriano’s fall ’18 collection while the model-turned-TV personality unleashed her dark side in a look courtesy of her personal stylist, Joanna Konjevod.

Another pair that matched — this time, per their electric blue lapels — were Darren Criss and Zedd. The “Glee” alum chose a Dior Homme suit and sleek Louboutins for his BBMAs look.

On the other hand, DJ and record producer Zedd let his bedazzled shoes to do the talking, stepping out in an all-black suit with blue detailing at the collar.

Lastly, there was Dua Lipa, who appeared every bit of a stunner in an ’80s glam outfit. The “New Rules” hitmaker’s plunging purple metallic dress made way for soaring platform heels that captured attention of guests and paparazzi.

However, Alyson Stoner had a twinning moment with her fellow artist, decking out in a similar shade and equally revealing ensemble composed of a power suit and snakelike stilettos.